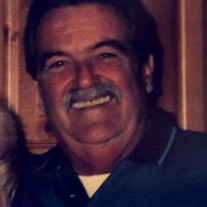 On Thursday, September 12, 2019, William “Bill” Harvey Bond, loving husband, father of five children, and grandfather of thirteen grandchildren passed away peacefully at the age of 83 due to a valiant fight against AML. Bill was born on July 18, 1936 in Washington D.C. to Thomas Oliver Bond and Dorothy Meem Bond. In 1954, he graduated from Massanutten Military Academy in Woodstock, Virginia, and went on to serve his country in the U.S Army. He later went to Alaska for a short stint to fight fires. Upon his return to Tallahassee, he entered the used car business as a manager, wholesaler, and independent car dealer for over 50 years. Everyone said he was the godfather of the used car business in the Panhandle. Bill enjoyed being outdoors and had an on-going love and passion for bird hunting and salt water fishing. He loved training dogs, and was a collector of knives and antique fishing lures. Bill and his wife enjoyed their little place of paradise on the Carrabelle River. Family and friends describe Bill as having a quick wit, always having wise words, being snarky, being a fun-loving prankster, and one that lived life to the fullest. Bill was one who saw the best in most. Bill was preceded in death by his father, mother, and one brother (Thomas Dalby Bond). He is survived by his wife Linda Johnson Bond; his constant companion, Boagie, an English Spaniel; his brother Monte Blair Bond; his five children, Laura Bond Davis (Kevin), Lisa Beck Schram (Doug), William H. Bond, Jr. (Wendy ), Michelle Beck, Brian Allen Bond (Rachel ); his mother-in-law, Clara Johnson; his sisters-in-law, Betty Bond; Virginia Bond; Anna Dean; and Margie Johnson; his thirteen grandchildren, his four great-grandchildren, and several nieces and nephews. A service is planned for 11:00 AM, Monday, October 7th at the Tallahassee National Cemetery.

On Thursday, September 12, 2019, William &#8220;Bill&#8221; Harvey Bond, loving husband, father of five children, and grandfather of thirteen grandchildren passed away peacefully at the age of 83 due to a valiant fight against AML. Bill was... View Obituary & Service Information

The family of William Harvey Bond created this Life Tributes page to make it easy to share your memories.