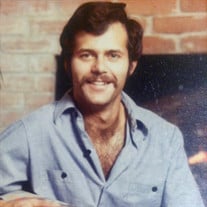 James Tucker ("Tuck") Munroe (July 22, 1955-February 15, 2019) passed quietly in his sleep in his much-loved Gadsden County home in the deep woods. The son of Bobby (Robert F.) Munroe and Beth (Elizabeth Evans) Munroe (both deceased) of Quincy. He is mourned by the many people he left behind who adored him: his daughter Ann Fraser Munroe (his crowning achievement) and her mother, Robin Hartsfield Munroe; his sister Bobbie Dow Munroe; his sisters Monica Munroe Roberts and Susan Munroe Morgan and their mother, Nicki Little; and a host of caring cousins and friends who thank him so much for enriching their lives with his sparkling personality, wonderful yarns, fantastic sense of humor and dashing good looks. On a trip out west, he once said, “You have to leave home to be sophisticated.” However, there was never a doubt that his heart belonged to Gadsden County. He called it The Garden of Eden, the place where everything was bountiful, including the bugs. His father was his first best friend and, when Tuck was young, they spent countless hours working on the farm or fishing at Lake Talquin. He survived their adventures – an extraordinary feat, indeed, if you knew Bobby Munroe. A favorite picture shows Tuck at 10 standing in front of a huge tractor holding a chain saw with a 45 stuck in his belt. When he saw that picture decades later, he said, “Nothing has changed much except the tractor is a lot newer and I’m a lot older.” Then, he laughed, shoulders bouncing with each chuckle, knowing that, while he had not gone far, he was exactly where he wanted to be. A joyous chorus of angels will exclaim upon his arrival at the heavenly gates, “Tuck’s here! The party can start!” King Tut, life won’t be nearly as much fun without you. Please direct donations in his memory to the Apalachee Center / Primary Care Center Detox Unit: 2634 Capital Circle NE, Tallahassee, FL 32308, or call 850-523-3201. There will be a celebration of his life at Sunnyside Farm, 2PM, March 31, 2019.

The family of Tuck Munroe created this Life Tributes page to make it easy to share your memories.