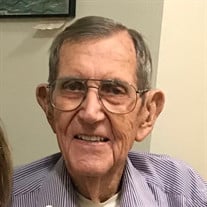 Tommy Allison Larned was born on August 20, 1925 in Haskell,Tx. and died April 26, 2019 in Tallahassee at the age of 93. He lived a full and happy life. Tommy left Haskell to serve in General Patton’s 3rd Army during World War II and received many medals including the Bronze Star. He re-enlisted and served in the Signal Corps, a branch of the Army, during the Korean War. In 1953, he moved to Mulberry, Florida where he began his career as a welder for Cyanamid Phosphate Company and married his forever love, a nurse named Jane Cox Larned. They had two daughters, Susan and Judi. Tommy had a full life in Mulberry as an active member of the union and as a Mason as well as a loving father and husband. When he retired from his career as a welder and dragline operator, he kept himself busy with his many hobbies. Those included traveling, collecting guns and knives and playing cards. He amassed a large, impressive collection of fossils and shark’s teeth that he found while living in central Florida. Tommy kept active throughout the years with garage sale bargain hunting and at age 80 when he relocated to Tallahassee to be closer to his daughters, he became very active at the Tallahassee Senior Center and discovered a talent for drawing with colored pencils. He drew many pictures and won awards for his drawings. As long as he was able, he was very active with Northwoods Baptist Church. Pacifica/Woodmont Assisted Living in Tallahassee has been his home for the last few years. There, he played bingo everyday, enjoying winning more than losing. He was always ready sing a song, to tell a good story, recite poetry, or share a funny limerick. Tommy was preceded in death by the love of his life, his wife, Jane and his parents, Grover and May Larned and his only sister, Venita Kreger, and all of his brothers, Mather, Jack, Joe, and Bud. He leaves behind two daughters, Susan (Gregg) Womble of Tallahassee, Judi (Darrell) Taylor of The Villages. His grandchildren Thomas (fiancée Katie) Womble, Amanda (Mike) Thai all of Tallahassee, Felisity (Dennis) Taylor of Crawfordville, and Tholley (Sarah) Taylor of Tallahassee. His great grandchildren, Harper and Grayson Thai; Leo, Waylon and Clark Taylor, and Jackson Lee. Tommy will be missed for his quick wit and great presence. The family would like to thank Woodmont Memory Care and Big Bend Hospice for taking such good care of him. A burial is planned for Saturday May, 4 at 10 AM at Bethlehem Cemetery in Lithia, Fl followed by a Celebration of Life at the Mulberry United Methodist Church Fellowship Hall, 306 North Church Ave., Mulberry, Fl at 12:00 PM. In lieu of flowers, please consider a donation in Tommy’s name to Big Bend Hospice , Northwoods Baptist Church of Tallahassee, Fl or the Senior Center of Tallahassee Fl. Lifesong(850/627-1111 or lifesongfunerals.com) is assisting the family with arrangements.

Tommy Allison Larned was born on August 20, 1925 in Haskell,Tx. and died April 26, 2019 in Tallahassee at the age of 93. He lived a full and happy life. Tommy left Haskell to serve in General Patton&#8217;s 3rd Army during World War II and... View Obituary & Service Information

The family of Tommy Allison Larned created this Life Tributes page to make it easy to share your memories.