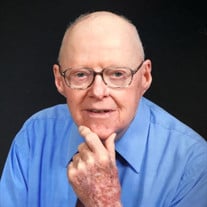 Thomas Andrew Lent, age 96, of Chattahoochee, Florida, passed away Monday, May 24, 2021, in his home. Funeral services for Mr. Lent will be held on Monday, May 31, 2021 at 10:00 a.m. at St. Thomas the Apostle Catholic Church in Quincy, Florida. Thomas Lent was born in Syracuse, New York, to William and Genevieve Burke Lent on Sunday, January 18, 1925. He was predeceased by his parents, his brothers William, John, Robert, and Daniel Lent, and by Ruth Gardner Lent, his wife of 30 years and mother of his children. He is survived by his wife of 34 years, Phyllis Lent, of Chattahoochee; his brother, Paul Lent of Syracuse, New York; his daughters, Susan Lent Toole (Phillip) of Chattahoochee, Dr. Paula Lent of Boulder, Colorado; his son, James Lent of Irvine, California; his grandchildren, Catherine Toole Duncan (Jason), James Toole (Ashley), Michael Toole (Kristi), and Jenevieve Lent; his great-grandchildren Grace, Isabel, and Jonathan, and many nieces and nephews, all of whom he loved. Other much-loved family members include Michael, Iris, Judy, Linda and their families. Thomas was baptized in and grew up in St. Vincent de Paul Catholic Church in Syracuse, New York. He left St. Vincent’s High School at 17 in 1942 to enlist in the United States Navy during World War II. After the war he returned to St. Vincent’s to graduate with his younger brothers and other veterans in 1947. He returned to the Navy for service in the Korean War. He joined the Syracuse Fire Department after Korea, retiring as a lieutenant in 1973. After moving to southern California, he continued to train fire fighters at March Airforce Base in Riverside, California, for a total of 39 years of fire service. He moved with Phyllis to Chattahoochee in 2006. Active in veteran’s affairs throughout his life, he was a member of the American Legion, the Veterans of Foreign Wars, of which he was post commander in Pomona, California, and Tallahassee, Florida, the Elks Club, and the Moose Lodge. He was a communicant of St. Thomas the Apostle Catholic Church. A tower of strength, love, and integrity, he will be sorely missed by his family and friends. He will be interred at Hillcrest Cemetery in Quincy, Florida.

The family of Thomas A. Lent created this Life Tributes page to make it easy to share your memories.