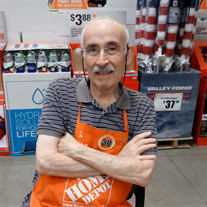 Taskin Dincman of Tallahassee, Florida, died on Saturday, November 4, 2017 after an eight-month long battle with cancer. Taskin was known and loved by many as the friendly, wise-cracking “Turk” who worked on the Service Desk at the Home Depot store on Northeast Capital Circle. He lived his life to the fullest. Taskin was born in Ankara, Turkey on June 14, 1942 and later immigrated to the United States where he became a proud naturalized U.S. citizen. He graduated from Middle East Technical University (Ankara, Turkey) in 1970 with a Bachelor of Science degree in Electrical Engineering. Taskin worked for General Electric and had an outstanding thirty-two year career with Home Depot. Taskin lived in Miami, Florida, until 2006 when he moved to Tallahassee to be closer to family. He is survived by his sons, Tolga Dincman (Holly) of Tallahassee, and Dr. Toros Dincman (Savanna) of Charleston, South Carolina, as well as his grandson, Blake Dincman, of Tallahassee. He is also survived by his best friend, Izzet Pekarun, of Istanbul, Turkey; and former wife, Lale Toker of Pawley's Island, SC. Taskin was preceded in death by his parents, Hikmet and Hurmuz Dincman, and his brothers, Dr. Yalcin Dincman and Coskun Dincman. A private interment will be held for immediate family at Roselawn Cemetery. A Celebration of Life will be held for friends and family on Tuesday, November 7, 2017 from 2:00 – 5:00 p.m. at the Gardner's Cottage, Maclay Gardens State Park, 3540 Thomasville Rd. Tallahassee, FL 32309. Drop-ins are welcomed. Lifesong Funeral Home is assisting the family with arrangements. The family would like to thank the caregivers at Big Bend Hospice for their kindness and compassion. Online memorial contributions may be made in Taskin’s name to Big Bend Hospice at www.bigbendhospice.org.

Taskin Dincman of Tallahassee, Florida, died on Saturday, November 4, 2017 after an eight-month long battle with cancer. Taskin was known and loved by many as the friendly, wise-cracking &#8220;Turk&#8221; who worked on the Service Desk at... View Obituary & Service Information

The family of Taskin Dincman created this Life Tributes page to make it easy to share your memories.