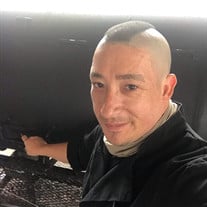 Stephen Anthony Griffin, 46, of Bainbridge, GA, was set free on April 24, 2022, after a 10-month battle with head and neck cancer. He passed peacefully, surrounded by his loving family. Throughout the difficult journey, no matter how hard the fall, Stephen stood back up and faced the enemy with an unbroken spirit. Stephen was born on January 17, 1976, in Fayetteville, NC. He graduated from Bainbridge High School in 1994. He enjoyed playing the trombone, as well as singing in a Quartet. Following high school, Stephen attended Keiser University in Tallahassee, FL where he earned his degree in Culinary Arts. Over the course of his career as a chef, he worked in multiple affluent restaurants in Tallahassee, FL and Statesboro, GA. Before his battle began, he, along with his wife, Amanda Guthrie Griffin, and youngest 2 children, relocated to Thomasville, GA, where he became District Manager over several restaurants in South Georgia and North Florida. Cooking was one of Stephen’s greatest passions. It was his way of serving and bringing joy to people, both family and strangers alike. The preparation of a meal was more than a job or a task to be done for Stephen, it was a labor of love. Every dish he made, had copious amounts of thought and purpose poured into it, and it was evident with every bite. Stephen enjoyed spending time outdoors. He liked doing things with his family such as camping, fishing, hiking on trails, shooting guns, making fires, and throwing tomahawks. He liked creating wood projects as well. Gifted with artistic ability and creativity, he could draw anything he saw. He brought laughter and fun everywhere he went. Stephen trusted Jesus as his Lord and savior. Throughout his struggle he prioritized reading the word, family devotions, and praying. His faith grew stronger with each day he spent in battle. He was a true warrior for the Lord, never losing hope, and keeping his chin up, right until the time he earned his victory. In addition to his devoted wife, Stephen is survived by three daughters: 23-year-old Morgan Griffin Lively (Reese), 21-year-old Niven Claire Griffin, 6-year-old Lillian Sybil Griffin; and his son, Logan Gabriel Griffin, who is 7 years old. Stephen recently became Grandpa to twin granddaughters JoAnna Stevie and Scarlett Reese Lively. He is also survived by his brother and best friend Adam Scott Griffin (Kate), and his parents, Stephen Earl, and Connie Cain Griffin. A celebration of life will be held on Saturday April 30, 2022, at 2682 E Washington Hwy Monticello, FL 32344 from 4PM-8PM. If you would like to help the family during this difficult time, you can donate to their Help Support The Griffin Family GoFundMe. “Yet I am always with you; you hold me by my right hand. You guide me with your counsel, and afterward you will take me into glory.” Psalm 73:23-24

Stephen Anthony Griffin, 46, of Bainbridge, GA, was set free on April 24, 2022, after a 10-month battle with head and neck cancer. He passed peacefully, surrounded by his loving family. Throughout the difficult journey, no matter how hard the... View Obituary & Service Information

The family of Stephen Anthony Griffin created this Life Tributes page to make it easy to share your memories.