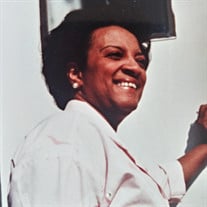 Shirley Maxine Stafford Brown earned her wings on May 25, 2019. Her final days were spent surrounded by family at her home in Tallahassee, Florida. The love of her life, her husband of 47 years, Nathan Brown, Jr. was at her side when the Lord called. Born, October 5, 1942 in Jacksonville, Florida to the late John Isaiah Stafford and the late Louvenia Marion Hill Stafford, Shirley was the couple’s second child. She was the middle of a close-knit trio consisting of her older sister, the late Francenia Marion Stafford and younger brother John Isaiah Stafford, Jr. Later as a responsible teenager, Shirley would help her mother with younger brothers, James Stafford and Jerald Stafford, all of Jacksonville, Florida. Shirley was extremely intelligent and graduated from Stanton College Preparatory School in Jacksonville and Bethune Cookman College in Daytona Beach. Additionally, she took post-graduate courses at Tuskegee University and Edward Waters College, where she met the captain of the basketball team – Nathan Brown, Jr. The tall, handsome athlete turned out to be highly intelligent as well. Their courtship began in 1965, and they married in 1971. The pair valued education and followed each other around Florida as they progressed in their careers. Mrs. Brown would earn a master’s degree from Nova University by the time they settled in Titusville, Florida. Through her career in education, Mrs. Brown impacted thousands of students for more than 30 years as she taught Earth Science, Biology, and Chemistry in Brevard County, Florida; Leon County, Florida; and Colquitt County, Georgia. Students attending Andrew Jackson Middle School in Titusville, Florida; Lincoln High School in Tallahassee, Florida; Norman Park Elementary School in Norman Park, Georgia; and Colquitt County High School in Moultrie, Georgia will remember Mrs. Brown’s beautiful smile and generous heart. They may also remember she was the teacher who wore a lab coat to protect her stylish but always professional attire. Mrs. Brown was a gorgeous woman but not a socialite. Her family was her world, and her homes were her castles. Her free time was always spent with her daughters Varonika (“Niki”) and Victoria (“Tori”) and her husband Nathan until grandchildren came along. The five grandchildren were continuously on her mind. Mrs. Brown is survived by her beloved husband, Nathan Brown, Jr. of Tallahassee, Florida; daughters Varonika (Ryan) Hardman and Victoria (Kennis) Thomas; five grandchildren: Olivia Hamilton, Logan Hardman, Michael, Mason, and Mackenzie Thomas, all of Columbus, Georgia; brothers John (Hilda) Stafford, James (Julie) Stafford, and Jerald Stafford, all of Jacksonville; and the dear sons of her late sister Ronald Dew of New York and Andre Celestine of Jacksonville; and a host of other relatives and friends. Mrs. Brown’s immediate family extends heartfelt appreciation to Shirley’s sisters-in-law in the Brown family who rushed to provide comfort and care in her final days, as well as Stafford family nieces and nephews for calls, prayers and visits. Final arrangements include a private celebration of life in Columbus and an additional celebration in Jacksonville, Florida on June 8th. Mrs. Brown will be laid to rest with her parents at Restlawn Memorial Gardens in Jacksonville. In lieu of flowers, donations can be made to Big Bend Hospice of Tallahassee in memory of Shirley Brown.

Shirley Maxine Stafford Brown earned her wings on May 25, 2019. Her final days were spent surrounded by family at her home in Tallahassee, Florida. The love of her life, her husband of 47 years, Nathan Brown, Jr. was at her side when the Lord... View Obituary & Service Information

The family of Shirley Stafford Brown created this Life Tributes page to make it easy to share your memories.