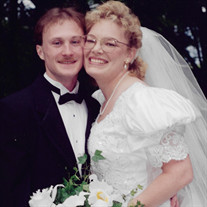 Shelley Lynn Taylor-Donahue, 52, passed from this life on Tuesday, January 29 after a battle with Cancer. She passed peacefully in her sleep at her home in Tallahassee, surrounded by her human and “furry” family. Shelley faced the past two and a half years with amazing strength and selflessness, concerning herself more with the well-being of family, friends and colleagues who would survive her. For 34 years Shelley was an advocate for anyone touched directly or indirectly by HIV. Throughout this period of radical change in understanding, knowledge and policy surrounding HIV, Shelley was a fierce and constant ambassador, offering compassion and demanding change in public attitude. Beginning with volunteer work in high school, Shelley continued to pursue this mission at EVMS, EVAN (TACT), and the state Public Health Departments in Virginia and Florida. Shelley’s passion lead her to a Masters in Public Health specializing in Epidemiology. Her most recent work was as an administrator of the Ryan White Foundation, the largest provider of services for people living with HIV/AIDS in the United States. Affectionately referred to as “Boss Lady” by colleagues throughout her career, she mentored and inspired a new generation of HIV advocates. In her personal life, Shelley and her husband Chris spent 22 years navigating life together. They built a home for daughter Sage and many “furry” children including Lily and Spook. They shared an affinity for Caribbean cruises, NCIS, Metallica and a love of cats. Shelley was born to and preceded in death by Kenneth C Taylor (1937-2017) of New Smyrna Beach, Florida, and Linda R Williams (1942-2018) of Jacksonville, Florida. Shelley is survived by her husband, Christopher Donahue, of Tallahassee, Florida; her younger brother, Neal Taylor, of Albany, New York; her step-daughter, Sage Warner McCoy, of Norfolk, Virginia; her step-mother, Cheryl Taylor, of Florida; her step-father, Rodney Williams, of California, and her aunts, Sylvia Prevatt, Lisa Thomas, Peggy Roche and Tanya Brannan. Rather than a formal funeral service, Shelley wished for an informal gathering of family, friends and colleagues to celebrate and reminisce. Several locations are being considered, including Norfolk, Virginia and St. Petersburg, as well as Tallahassee. Please share your interest directly with Chris at [email protected] In lieu of flowers, please consider donations in Shelley’s name to the Ryan White Foundation through Big Bend Cares, www.bigbendcares.org, Stand-Up to Cancer, https://standuptocancer.org/ or the A.S.P.C.A, https://secure.aspca.org/donate/donate

Shelley Lynn Taylor-Donahue, 52, passed from this life on Tuesday, January 29 after a battle with Cancer. She passed peacefully in her sleep at her home in Tallahassee, surrounded by her human and &#8220;furry&#8221; family. Shelley faced the... View Obituary & Service Information

The family of Shelley Taylor-Donahue created this Life Tributes page to make it easy to share your memories.

Shelley Lynn Taylor-Donahue, 52, passed from this life on Tuesday,...