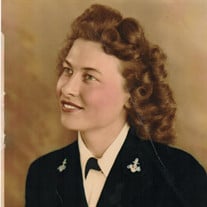 Sarah Ella (Brock) Martel, age 91, died peacefully on December 20, 2014, after a brief illness. She was a WWII veteran. Sarah was born on November 22, 1923, in Cairo, Georgia, the middle child of Henry and Vida Brock. Upon graduation from Havana High, Sarah attended business college, and shortly thereafter she responded to the war efforts by joining the Navy WAVES. Stationed in Biloxi, Mississippi, Sarah's assignments included courtroom trial recording, personnel management, and development of training material for the Lookout Recognition School. While at Biloxi, Sarah met the love of her life and husband of 44 years, Raymond Martel. Although Ray's work took them to a variety of job sites, they spent the majority of time raising their children in Flagler Beach, Florida and Holly Hill, South Carolina. Sarah thoroughly loved athletics, playing both high school and Navy basketball as well as women's league softball. She also found pleasure in flower arranging, cooking, entertaining, casino visits, travel, fishing and socializing with friends and family. Beyond the Navy, Sarah held multiple jobs including; retail sales, a routing planner for Eastern Airlines, secretary for the Walsh Corporation, dental assistant, and substitute teacher. For the past seven years Sarah lived with her daughter and son-in-law in San Diego, California where she made numerous friends and traveled frequently. In September 2014, Sarah was nominated by the Honor Flight of San Diego for a tour of the war memorials in Washington, DC. Accompanied by her daughter and sharing the trip with seventy-eight other WW II veterans, Sarah considered this a once in a lifetime experience. Sarah is survived by: her sisters Odene Reilly of Tallahassee, Florida; Mary Henson of Largo, Florida; son, Phil (Sophie) Martel of Elizabeth City, North Carolina; daughter Kris (Randy) Large of San Diego, California; granddaughters Amanda Grisdale and Makayla Martel; numerous nieces and nephews; and a number other relatives and close friends. There will be a memorial service at the Bevis Funeral Home Chapel, 2710 North Monroe St., at one o'clock, Saturday, December 27, 2014. Tholley Taylor with AmeriCare Funeral and Cremation (www.AmeriCarefc.com or 850/627-1111) is assisting the family with arrangements. In lieu of flowers, donations can be made to the Tallahassee Honor Flight by mail at P.O. Box 12033, Tallahassee, Florida, 32317 or through their web site, HonorFlightTallahassee.org.

Sarah Ella (Brock) Martel, age 91, died peacefully on December 20, 2014, after a brief illness. She was a WWII veteran. Sarah was born on November 22, 1923, in Cairo, Georgia, the middle child of Henry and Vida Brock. Upon graduation from... View Obituary & Service Information

The family of Sarah Ella (Brock) Martel created this Life Tributes page to make it easy to share your memories.