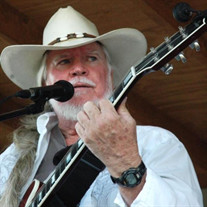 ﻿Sam Ward was one tough cowboy and he didn’t go down without a fight. After battling cancer for 5 years, he passed on Wednesday, May 13th at 12:31 AM. He was born in Odessa, Texas on March 14, 1948. He was preceded in death by his father, Troy Ward Sr., and his mother, Maxie Lee Woods Ward. Also by a brother, Jeff Ward and a sister, Shirley Garner. He is survived by his daughter, Tammy Ward Simmons (Rob) of Greensboro, NC and son, Jesse Ward ( Barbara) of Eden, NC. Nine grandchildren Abbey, Bridget, Jack, Gina, and Carlos Simmons and Ashley, Amber, Hunter and Heather Ward and three great grandchildren. He is also survived by two brothers, Troy Ward Jr(Brenda) of Ft Davis, Texas and Dwight Ward of Freeport, Florida, two sisters Brenda Lindsey of Pell City, Alabama and Lisa Reddick (David) of Holt, Florida. He will also be missed by many nieces, nephews and friends. You would rarely see Sam without his cowboy hat on his head, but he wore many other hats as well; he was a brother, a friend, a father, a grandfather, a boss and a musician. He was not your typical “boss,” he truly had a concern and interest in bettering the lives of those that worked for him. He wouldn’t give up on people. His wisdom, mentorship, kindness and friendship will never be forgotten. Sam was a ladies man, described by many as a “true southern gentleman.” He had swagger before swagger was even a thing. His cowboy hat, a perfectly ironed shirt unbuttoned a few down, Wranglers and sharp looking boots. He’d greet you with a smile and “Hey Darlin” in his deep voice. Country music was in his bones. He was a singer, songwriter, and loved playing guitar. He was truly passionate about music and would play for hours. Back porch concerts at family gatherings or on stage anywhere, when Sam sang some of his original songs the whole room smiled. It’s almost impossible to describe the bond he shared with his brothers Dwight and Troy, but it was evident and precious until his last breath. There was only one Sam Ward and he was greatly loved and will be greatly missed!

The family of Sammy Lee Ward created this Life Tributes page to make it easy to share your memories.

﻿Sam Ward was one tough cowboy and he didn’t go down without...