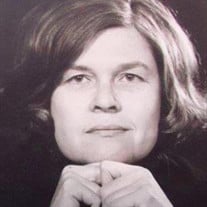 Ruth Dryden Deshaies passed away on Sunday, October 15, 2017, after a brief stay at The Margaret Z. Dozier Hospice House, Tallahassee, Florida. Ruth, a retired artist and professor, resided at Westminster Oaks retirement community for 9 years. She had just celebrated her 86th birthday. Ruth was born on October 8, 1931, in Hannibal, Missouri. She was the only child of Robert Newton Dryden, a traveling casket salesman, and Mary Elizabeth Davis Dryden, a homemaker. Ruth had an idyllic childhood, in the town most notable as the early home of Mark Twain. The influence of her midwestern, Presbyterian upbringing and the Mississippi River never left her. In Hannibal, Ruth began drawing and dreaming of becoming an artist. After high school, she attended MacMurray College in Jacksonville, Illinois. She studied under James Guy, who was a close friend of both Leger and Mondrian. Ruth soon abandoned subject matter after discovering the work of Miro, Kandinsky, Picasso, and Jackson Pollock. Awarded a Fulbright scholarship following graduation, Ruth spent a year in war-torn Munich. There she discovered a world of opera, classical music, and theater. As she would say, it was a year of deep culture shock. Exploring the finest of museums in Europe and exposure to the great German Expressionists changed the girl from Hannibal forever. After returning to the States, Ruth entered graduate school at Tulane University with a Carnegie Fellowship. Here her artwork took on its first truly abstract style. That summer she traveled to Maine on a scholarship to the Ogunquit School of Painting and Sculpture. There she met members of the Indiana University Art Department who persuaded her to complete her graduate studies at IU. The environment at Indiana was European and stimulating. She met and grew to know sculptors David Smith, George Rickey, Robert Laurent, the German painter Max Beckmann, and printmaker Arthur Deshaies. Later Ruth and Arthur married. In 1956, she and Arthur rented a studio-loft on 22nd Street in New York. Arthur taught at Pratt Institute and Ruth traveled to Norton, Massachusetts to teach at Wheaton College. Their summers were spent traveling. Once they drove a big green Cadillac named the Green Dragon all the way to Mexico, in the days before air conditioning. In 1963, the couple moved to Tallahassee with their three-year-old daughter, Mignon. In Tallahassee, they continued careers as artist/teachers. In 1966 Ruth began teaching at the new Tallahassee Junior College, which became Tallahassee Community College. She founded TCC’s art department. Ruth always claimed to be the first teacher TCC hired. Ruth taught drawing, design, and art history and mentored thousands of students. She was an artist, but boy did she love teaching! Throughout her life, Ruth was a devoted friend and mother to Mignon, and Grandma Ruth to Sarah Dryden and Sophie Mignon. Opera music was always playing at her home in Betton Hills, where she had a studio. She loved entertaining friends, most of whom were artists or colleagues from TCC and FSU. Ruth was also a proud American and the first in her family to join the Democratic party. Sixty solo exhibitions and 100 group exhibitions featured Ruth’s work. She felt her most prestigious exhibition was a mixed media show at the National Academy of Sciences, Washington DC, arranged by distinguished FSU professor, Dr. Michael Kasha. Ruth will be greatly missed especially by her daughter and granddaughters, who plan a trip back to Hannibal, in lieu of a traditional memorial service.

The family of Ruth Dryden Deshaies created this Life Tributes page to make it easy to share your memories.