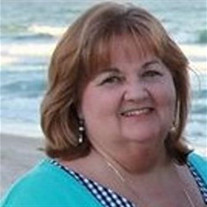 Mrs. Rosanne Taylor Morse born August 20, 1947, passed away peacefully with her husband and her two children by her side on Wednesday, June 19, 2019. She is survived by her beloved husband since 1965, Wally; her adult children Dr. Steven Morse (Jennifer), and Dr. Tracey Morse (Brian Wiebler), her grandchildren Kaitlyn, Ryan, Leo, and Taylor; her brother Peter Taylor; her sisters Patricia Guariglia, Valerie Allen Mancuso, and Lorraine Hjelmeir; and many nieces, nephews, and friends. Through the lifelong support of Attorneys William G. Miller Jr. and Alicia Zachman, she earned her Master’s degree in Marriage & Family Therapy became the Executive Director of the Ford Jeter Brown Foundation, and opened the Prelude Infant Development in Fort Lauderdale, FL. She subsequently enjoyed a career as the director of the Broward County Sexual Assault Treatment Center and Child Protection Team. Upon retirement, she and her husband opened The Pink Porch Bookstore on Main Street in downtown Alachua, FL expanding their friendships and experiences. She helped found the Alachua Business League, mentored many young entrepreneurs and participated in many civic organizations including the Alachua Women’s Club and several government boards. For her second retirement, she settled in Tallahassee, FL to be closer to her family. While there, she served on the Cornerstone Learning Community Board of Trustees contributing to her youngest grandchildren’s school. To all her grandchildren, she was known as Nanny, a title of which she was most proud. Being a doting, loving, and creative grandmother was her most joyous life’s work. There will be a celebration of Rosanne’s life on July 21, in Alachua, FL. Details will be posted on her Facebook page. In lieu of flowers, donations may be made to Cornerstone Learning Community (2524 Hartsfield Rd, Tall., FL 32303) or to the charity of your choice in her honor.

Mrs. Rosanne Taylor Morse born August 20, 1947, passed away peacefully with her husband and her two children by her side on Wednesday, June 19, 2019. She is survived by her beloved husband since 1965, Wally; her adult children Dr. Steven Morse... View Obituary & Service Information

The family of Rosanne Taylor Morse created this Life Tributes page to make it easy to share your memories.