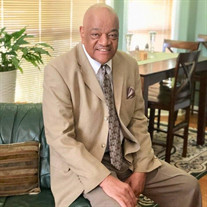 Ronnie “Ron” Monroe, 69, passed away Saturday, January 11, 2020, at his home in Duluth, Ga. He was born on February 7, 1950 in Quincy, Florida. He was preceded in death by his mother Ms. Hazel E. Figgers, his sister Patricia Ann Monroe and his father Robert Zeigler Monroe. He leaves to cherish his memory and continue his legacy, his sons, Patrick Monroe (Nixzaliz Monroe) and Justin Monroe; three siblings, his twin brother Robert of Tallahassee, Fl.; Edward (Anita) of North Ft. Myers, Fl.; and Sterling of Atlanta, Ga.; Cousins Henry Bryant, Jr, Hazel Williams, Janice Green and a host of other nieces, nephews, cousins and friends. Ron graduated from Carter-Parramore High School in 1969 and attended Florida A&M University. He served his country during the Vietnam War in the U.S. Air Force. Ron was employed by CIT Financial Services for more than 14 years. CIT Financial Services transferred him from Orlando, Fl. to Atlanta, Ga. in 1993 and he was eventually hired by Bank of America. He retired from Bank of America in 2018. Ron had a free-spirit and had an outgoing personality. He didn’t hesitate to tell you what was on his mind, so you never had to wonder what he was thinking. He was a die-hard Atlanta Falcon fan and an avid bowler. The service will be held at 1:00 PM on Monday, January 20th, 2020 at Lifesong, 20 South Duval St. in Quincy, FL. Interment will take place at Sunnyvale Cemetery in Quincy immediately following the service. " Blessed are those who mourn, for they will be comforted." (Matthew 5:4)

The family of Ronnie Monroe created this Life Tributes page to make it easy to share your memories.