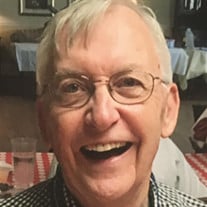 The Reverend Ronald Clifton Davis, age 79 years old, went to be with his Lord, on April 23, 2018 in Tallahassee, Florida. Ron was known for his joyous smile and laughter that would light up a room. Ron and his loving wife, Jean, were married 53 years, dedicated to their love of God, to their love for one another, and to their love for their children, family, friends, country, and Seminole sports. Ron was born on May 11, 1938 in Jacksonville, Florida to William G. Davis and Mary O’Neal Davis. He had three older siblings, Barnwell, Francis, and Roberta. He married the love of his life, Jean Peyton of Spotsylvania, Virginia after meeting her in Alexandria, while he was attending Virginia Theological Seminary. Ron and Jean initiated a special Florida-Virginia family bond, which eventually led to their acquired title as ‘Florginians’. They had two loving children, Mary-Margaret Peyton Davis and Jon Christopher Davis. Jon is married to Kathleen Shay and have two wonderful sons, Charlie (17) and Nicholas (11). Charlie proudly shares his Eagle Scout Rank with Ron as of 10 January 2018, where "Ronnie" Davis earned his Eagle Scout in 1953. Ron also greatly loved his nieces, Connie Durkin and Cindy Pace, and nephew Mitchell Pace, along with many other cousins, great-nieces, and great-nephews. Ron always beamed with great pride in his family and spoke about them all with great love. A remarkable teacher, scholar, athlete, pastor, and civil servant, Ron Davis' accomplishments are illustrated through his lifelong dedication to service. In his youth, he was active in the Episcopal Church and attended Camp Weed as a camper, counselor, and lifeguard, beginning a journey to last a lifetime. After graduating from Landon High School in Jacksonville in 1956, Ron attended Florida State University (FSU), serving as a lay minister at the Episcopal University Center at Ruge Hall and as a FSU cheerleader, which started a lifetime of cheering on FSU sports as one of the most exuberant sports enthusiasts anyone could know. Following graduation from FSU, he volunteered to serve in the U.S. Army for nearly two years before being selected by Bishop Hamilton West of the Episcopal Diocese of Florida to attend Virginia Theological Seminary. After his graduation in 1965, Ron was ordained into the Episcopal Diocese of Florida and served parishes in Jacksonville and Live Oak before being chosen as Director of Camps and Conferences at ‘Camp Weed’ located at St. Teresa Beach, Florida from 1971-1975. As Camp Director, Ron's leadership inspired many counselors and throngs of campers to continued service, both in the church and in their communities; he also led many adventures. Ron additionally served in parishes in Pensacola, Lakeland, and returned to Tallahassee in 1988. Basketball was a great passion for Ron throughout his life and there was no match for his competitiveness on the court, even as a "Reverend"! Ron and Jean “Florginians” enjoyed their life in Florida and stayed true to Virginia as their other home, making innumerable visits with Jean’s family in Spotsylvania, including lovingly accepting regular invitations from the Reverend Clyde Coleman to preach at Jean’s beloved childhood church, Travelers Rest Baptist Church. After retirement, Ron's 'Florginian' status remained constant as he continued to serve faithfully through organizations such as the Epilepsy Foundation and the State of Florida Department of Health, where he championed Bicycle Safety and services for Refugee health. Ron earned many awards for this work that helped improve peoples' lives and was even recognized in the "Who’s Who in Public Service in 2001". Ron and Jean spent the last decade following their retirements enjoying volunteering in FSU’s Music Therapy annual community singing programs in both the Intergenerational Choir and at weekly ministry and friendship in the Parkinson’s Awareness Choir. This brought much added joy and support during this decade when Ron was diagnosed with the neurodegenerative disease, FrontoTemporal Dementia (FTD). Ron shined his light and shared his love even until his final days positively impacting lives through his love for Jesus Christ. He is greatly loved and his love continues always through his family and loved ones. Ron Davis will always be remembered for his faith in God, his service as a leader, and as a loving husband, father, and friend; a devoted sports enthusiast, an avid Seminole fan, a music enthusiast, and inspirer of youth and old alike, and one with a contagious smile and joyful laugh. The family wishes to thank ClarityPoint Memory Care, Big Bend Hospice, Brookdale Centre Pointe, and the Lifesong Funeral Home for their loving care and support. In lieu of flowers, the family requests donation be made to Big Bend Hospice - https://www.bigbendhospice.org/ donate , Saint John’s Episcopal Church Tallahassee - http://www.saint-john.org/give1/ , or Travelers Rest Baptist Church - http://www.travelersrestbaptistchurch.net/ Funeral service to celebrate Ron’s life will be held on Monday, April 30, 2018 at 10:00 am at Saint John’s Episcopal Church, downtown Tallahassee, Florida. The family will receive visitors in the Lee Graham Lounge at St. John’s Episcopal Church on Sunday afternoon, 4:00-6:00 pm on April 29, 2018, Burial service will be at the Tallahassee National Cemetery, 5015 Apalachee Parkway, at noon.

The Reverend Ronald Clifton Davis, age 79 years old, went to be with his Lord, on April 23, 2018 in Tallahassee, Florida. Ron was known for his joyous smile and laughter that would light up a room. Ron and his loving wife, Jean, were married... View Obituary & Service Information

The family of Rev. Ronald Clifton "Ron" Davis created this Life Tributes page to make it easy to share your memories.