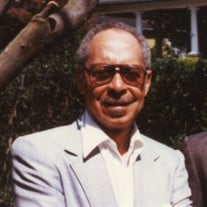 Tallahassee - Robert Thornton, 91, originally of Philadelphia; residing in Tallahassee since 2008, peacefully passed away 10 pm Thursday January 18th 2018 in his sons home in the presence of family. Services will be held at St. Peters Anglican Church, 4784 Thomasville Rd, Tallahassee. A visitation will be from 12:30-1:30 pm on Tuesday, January 30th with a funeral service beginning at 2:00 pm. A reception will follow in the Parish Hall. Robert was an amazing father, grandfather, friend and citizen of the world. He was an active member of the church and loved god, loved country, loved people, loved animals and loved life itself. At the age of 18, in 1944, this courageous patriot gladly served as a steward and a cook aboard the USS Battleship New Jersey during World War II. He received the Philippine Liberation Ribbon and the World War II Victory Medal. After the war he worked for 35 years for the State of Pennsylvania Liquor Control Board (1950-1985). Before his retirement he had obtained the rank of General Manager (GM). He loved his job. Robert never married but always wanted and desired a family. To see that ambition through he adopted 2 children Michael and David in 1972 and 1979. Mr. Thornton was the first single male in the state of Pennsylvania to be allowed to adopt a child. He raised both boys in Philadelphia; guiding them into manhood. After Robert retired from State of Pennsylvania Liquor Control Board he started and managed a business, renting apartments. He was an excellent landlord. Robert loved to cook and loved rummaging through the Philadelphia consignment/thrift shops. At age 82 Robert moved to Tallahassee (2008) and joined the congregation of St. Peters Anglican Church. As a new Tallahassean Robert loved going to the North Florida fair and the springtime Tallahassee. Parade. Preceding him in death are his Parents Emma and Dudley Sr; seven siblings: Arthur, Dudley jr., Henry, Floyd, Marie, James, and Joseph. Also his niece,Niecy. His many friends and family remember Robert as a kind-hearted “and” honest person. He had a vibrant personality and was beloved by many. He is survived by his children Dr. Michael Thornton of Tallahassee FL, and David Thornton Sr. of Philadelphia PA; grandchildren- Candice Daniely, Brandon Thornton, David Thornton Jr., great-grandchildren- Keymir Hargrove, Marquis Polk, and Dayla Daniely also his many beloved nephews and nieces; Patricia, Dwane, Marie, Cheryl, Donna, Gary, Gerald , Debbie, and Eric, He will be dearly missed by all. He will be dearly missed by all. Robert will be laid to rest at Rolling Green Memorial Park 1008 W Chester Pike, West Chester, PA on Saturday February 3rd 2018 at 10 am. A small graveside service will be conducted with military honors.

Tallahassee - Robert Thornton, 91, originally of Philadelphia; residing in Tallahassee since 2008, peacefully passed away 10 pm Thursday January 18th 2018 in his sons home in the presence of family. Services will be held at St. Peters Anglican... View Obituary & Service Information

The family of Robert Thornton created this Life Tributes page to make it easy to share your memories.