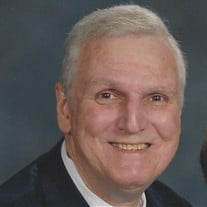 Robert “Bob” Macmaster, 68, passed away peacefully at his home, surrounded by family on Friday, December 8, 2017 after a short struggle with cancer. Bob was born April 4, 1949 in Meadville, PA, the son of Gordon Macmaster and Margaret (Peg) Macmaster, who both preceded him in death. Bob graduated from Cambridge Springs High School in 1967 and attended Lehigh University, taking up chemical engineering and a summer scholarship at the Universitaire Cite in Nice, France. Bob then decided to change his major to journalism/communications and attended Point Park College in Pittsburgh, PA. After graduation, he went to work as a sports editor/reporter/photographer for The Chandler Arizonan in Chandler, AZ. After a couple years, he decided to move back to Pennsylvania and got a job with the Oil City Derrick as a reporter/photographer and business/wire editor. This is where he met his wife, Carol. After 10 years, Bob was needing bigger challenges to satisfy his communications skills and moved his family to Florida. He worked one year with the Naples Daily News, when he was offered a job with the Florida Department of Corrections starting off as chief spokesman and media relations adviser in March, 1987. Now Bob was finally getting to use his many talents as a writer and spokesperson. He attended several “high profile” executions at Florida State Prison and a picture that he had taken of ‘Old Sparky’ had appeared in the 1988 issue of Life Magazine. As a part of his job as information director, his most important job of all, was handling the news media for the notorious Ted Bundy at Florida State Prison on January 25, 1989, which made headlines all over the world. After his time was over as spokesman, he worked in the Inspector General’s office, using all his computer skills, building computers and software, security, forensics and data recovery. Bob retired from Corrections in 2011 after having a career that provided him many challenges and satisfying his hunger for utilizing his writing and computer skills. He finally felt satisfied that he had accomplished some things worth while to end his work career as a journalist and move on to new dreams and whatever challenges the future held. Bob is survived by his wife, Carol of 40 years; three step-children, Jeffery Bryan (JoLena) of Tallahassee; Michelle Arbon (Ian) and granddaughter Emily of Jacksonville; Todd Bryan (Rebecca) and grandsons Colin and Riley of Leesburg; sister Ann Macmaster of Greensboro, NC and her two children Ellen and Daniel; brother-in-law, Roger Seel of Greensboro, NC; nephew Eric Seel (Lori) and their daughters, Alex and Arden of Avondale, PA; niece, Molly Seel of Greensboro, NC; niece, Katy Dickerson (Ben) and their son, Nash of Boone, NC; cousins, Dick and Vickie Muckinhaupt of Venice, FL; Fritz and Dottie Muckinhaupt of Templeton, CA; and Christine and Jack Hackett of Sun Lakes, AZ. Bob was preceded in death by his sister Susan Seel who passed away a year ago after her two year struggle with cancer. Bob and Carol were together were members of the Panhandle Ponies Mustang Club in it’s early beginnings. They were also members of the Tallahassee Streetrodders Car Club, the Florida Peace Officers Association, and Westminster Presbyterian Church where they found a wonderful, caring and loving congregation. Bob was always known to everyone as a workaholic of many talents of computer skills, home remodeling , electrical wiring, plumbing, concrete, roofing, flooring, wallpaper, auto mechanics, and restoring old cars. There was nothing Bob couldn’t tackle when he set his mind on it. He always loved helping others when they needed something fixed. A celebration of life memorial service will be held at Faith Presbyterian Church, 2200 North Meridian Rd., on Saturday January 20th at 11:00am. In lieu of flowers, donations may be made to Big Bend Hospice, 1723 Mahan Center Blvd., Tallahassee, FL 32308. Lifesong is assisting the family with arrangements.

Robert &#8220;Bob&#8221; Macmaster, 68, passed away peacefully at his home, surrounded by family on Friday, December 8, 2017 after a short struggle with cancer. Bob was born April 4, 1949 in Meadville, PA, the son of Gordon Macmaster and Margaret... View Obituary & Service Information

The family of Robert Weldon "Bob" Macmaster created this Life Tributes page to make it easy to share your memories.

Robert “Bob” Macmaster, 68, passed away peacefully at his home,...