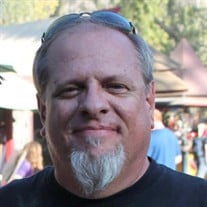 Richard Warfield II, 56, passed from this world on February 10, 2021 at his home in Tallahassee, Florida. Richard was born in Reno, Nevada on June 30, 1964 to Darby Ellis Warfield and Richard Floyd Warfield. From his early childhood to his adulthood, it was clear that the key to a rewarding life was Family and Friends. Richard would question his mother daily on this as a child “Can I have a friend now?" This would start him on a path where he would forever seek true friendship and knowledge. His constant love of family and friends was undeniable. He attended Sparks schools and worked at Rancharrah with his Grandfather Jack Ellis in Reno. There he learned his core values: Do things right the first time or don't do them at all. Eventually he left for college in California, earning an Associate's Degree in Computer Science-Electronics. After college , he started his career in the Silicon Valley. There he met his future wife and started a family of his very own. Through his work, he displayed his magic in research and design. Electronics and mechanics were his passion. Throughout his life, work and family were always paramount. He understood there was time to play and time to work. A busy man who always wanted to do more, Richard was a jack of all trades, but his love of cars was legendary. He would often jokingly refer to his cars as his other children. Richard loved being in the garage, playing the guitar, attending concerts, and vacationing with his loved ones. His friends and family were always at the core of any activity he loved to do. Richard was a man known for his humor and his ability to impact everyone around him. He will forever be known to those who knew him as a teacher of passions. Through his stories he enriched those around him. He loved learning new things and spreading his knowledge to others, from music trivia to his worldviews. He had strong opinions and was never afraid to show them while also being open-minded and willing to try anything once. Richard is survived by his wife, Merle Cayanan Warfield, children; Ian Morales Warfield & Angelina Morales Warfield and mother, Darby Ellis Warfield. An avid pet lover, he leaves behind two cats but joins many other pets that he has had throughout his life. He will be remembered for his sense of humor, devotion to loved ones, and strong-willed spirit through thick and thin. A celebration of life will be held in Reno, Nevada on February 27, 2021.

Richard Warfield II, 56, passed from this world on February 10, 2021 at his home in Tallahassee, Florida. Richard was born in Reno, Nevada on June 30, 1964 to Darby Ellis Warfield and Richard Floyd Warfield. From his early childhood to his adulthood,... View Obituary & Service Information

The family of Richard Warfield II created this Life Tributes page to make it easy to share your memories.