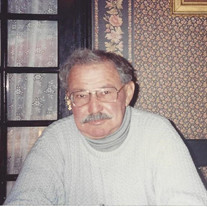 Richard E. Glick, 91, a retired professor of chemistry at Florida State University from 1959-1995, transitioned to "What's Next?" on Friday, June 1, 2018. [..."for life is eternal and love is immortal and death is only a horizon...and a horizon is nothing save the limit of our sight"... Rossiter Worthington Raymond] A native of Chicago, Illinois, he attended Sullivan High School before joining the U. S. Navy and serving as a corpsman and pharmacist mate at the Brooklyn Naval Hospital and on a hospital ship as World War II was coming to an end. He never had to deploy to the European theater and was honorably discharged. He then attended the University of Illinois (Urbana-Champaign) where he graduated with three bachelor of science degrees in chemistry, mathematics and physics. In 1954 he attained his doctorate at UCLA and did two post doctoral stints, one at Brookhaven National Laboratories on Long Island NY and the other as a Milton Fillmore fellow at Harvard University. HIs next stop was as an associate professor of chemistry at Penn State University, before joining the FSU faculty in 1959. Richard moved to Tallahassee in 1959 with his former wife, Roberta "Jo" Glick who was also in education and served in the Leon County School System until her retirement. Together they raised four children: D'ann Glick Calams(McKinney, TX), Randolph S. Glick(Latrobe, PA), Debbie Glick Skinner, and Dan J. Glick(Tallahassee, FL) After his father's premature death, Dick took up swimming at the age of 39 and joined the lunch bunch which swam over their lunch hours at the university every day. He also participated in Master's competitive swimming. He loved riding his stationary exercise bicycle at home and would always watch the Tour de France every July. Avoiding doctors, he had a involved vitamin regimen and only took prescriptions during the last four months of his life. He loved fast cars and racing, owing a Shelby Cobra, a Lotus Europa and a 1993 Mazda RX-7 with red leather interior and silver exterior. A Formula I fan, he attended the Monaco Grand Prix in Monte Carlo in person in the past and the tv broadcast of the 2018 race on Memorial Day Weekend was his last. Never one to go to the movies, he nevertheless loved to watch on cable The Day of the Jackal, Casablanca, Chocolat, Ronin and oddly, Roadhouse! Dick loved birds and could name nearly every species. During the week preceeding his death pairs of mated cardinals seemed omnipresent around our home. A devout Francophile, he spent a year on sabbatical from FSU in Peymeinade France(near Grasse) at the Laboratoire de Physique Moleculaire des Hautes Energies After his FSU retirement he started his own energy consulting business Corporation for Future Resources and wanted to solve the world's energy problems by finding renewable alternative fuel sources using bio-mass sources. A frequent morning visitor to Panera Bread on Blairstone Road, he and his wife Karen had a standing Friday night date at Kool Beanz Cafe on Thomasville Road at 5:30 sharp, table 23. He is survived by his wife, Karen Nutting, a brother, Gary Glick(Irvine, California), a sister, Honey Cooper(San Diego, California), his four children, numerous grandchildren, several great-grandchildren and several cousins. He was preceeded in death by his former wife, Roberta Jo Glick and a granddaughter, Stephanie Calams. "Though lovers be lost, love shall not, and death shall have no dominion" ---Dylan Thomas The following is a link to an article in the Tallahassee Democrat which is running on Thursday, June 14, 2018: https://www.tallahassee.com/story/news/2018/06/13/richard-glick-retired-florida-state-fsu-chemistry-professor-dies-91/696077002/

Richard E. Glick, 91, a retired professor of chemistry at Florida State University from 1959-1995, transitioned to "What's Next?" on Friday, June 1, 2018. [..."for life is eternal and love is immortal and death is only a horizon...and a horizon... View Obituary & Service Information

The family of Richard Glick created this Life Tributes page to make it easy to share your memories.

Richard E. Glick, 91, a retired professor of chemistry at Florida...