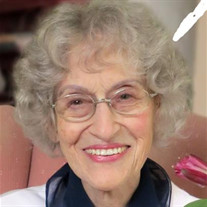 Pearl King passed away on Tuesday, April 23, 2019 due to a medical condition that was only discovered 10 days earlier. Knowing the end was near, Pearl had precious time to visit with, and say goodbye to, loved ones far and near. She understood what was happening and was at peace as she approached her life’s final passage. The family is developing plans for a “Celebration of Life” next summer in Tallahassee so that more of Pearl’s far-flung family and friends will be able to attend. In the meantime, an informal gathering for “Remembering Pearl” will be held at 2:00 pm on Sunday, May 5th in the Westminster Oaks chapel located on the lower level of Oak South, 4425 Meandering Way, Tallahassee, Florida. Condolences can be sent to The King Family at 5249 High Colony Drive, Tallahassee, FL 32317. In lieu of flowers, those wishing to pay tribute are encouraged to make a donation in her name to Big Bend Hospice in Tallahassee. Donations can be made online at www.bigbendhospice.org or by mailing a check to: Big Bend Hospice Foundation 1723 Mahan Center Blvd. Tallahassee, FL 32308 Pearl was born in Buffalo, Kansas on July 12, 1920. She came into the world when Prohibition was starting, women were not allowed to vote, and the Great Depression was looming nine years in the future. The daughter of George Z. “Happy” Gaut and Stella Webb, Pearl had two sisters and three brothers. She was the last surviving member of her immediate family. Pearl grew up in southeastern Kansas where she graduated from Caney High School in 1938 and then attended Business College in Wichita, Kansas. In March 1941, Pearl married Randolph King whom she’d met while in school. The fact that it was against company policy, where she was working at the time, for female employees to be married is a testament to the changes she witnessed in her lifetime. She and her loving husband of 50 years had four children: Mike, Paul, Dale, and a daughter, Susan Innes (who died in 2010). Pearl is survived by her three sons, Mike’s wife Françoise and Susan’s husband Brad Innes, two grandsons (Matt King and Colin King), two granddaughters (Cary Wright and Danielle Burroughs), and seven great grandchildren (Katherine Wright, Lauren Wright, Kainen Burroughs, Drake Burroughs, Scarlett Burroughs, Addison King, and Noah King). Pearl and Randy moved their family from the Kansas City area to Jacksonville, Florida, in 1954. Randy began a career in construction and Pearl went from being a stay-at-home mom to a bookkeeper at Jacksonville Naval Air Station. In 1963, their civil-service jobs took them to Merritt Island, Florida where they worked for the Corps of Engineers at the Kennedy Space Center. Both Pearl and Randy signed their names on a beam used in the “topping out” ceremony for the iconic Vertical Assembly Building where Saturn rockets were assembled for the Apollo moon missions. When work on the Kennedy Space Center was completed, Pearl’s and Randy’s jobs took them first to Orlando, Florida and eventually on to Kingston, Tennessee where they both retired in the late 1980s. Then, in 1991, six months after their 50th anniversary, Randy died suddenly, the victim of a stroke. Three years after Randy’s death, Pearl moved to Tallahassee, Florida to be near her daughter. In 1997, at the Tallahassee Senior Center, Pearl met Lyle Bridgman who was also widowed. They married in December of that year. Lyle passed away in December 2012. Pearl’s creativity was the basis for many of her life’s pleasures. She loved dancing. She said that if she could pick the time when she died, it would be at the end of a dance. She enjoyed square and round dancing with both of her husbands. She also expressed her creativity by sewing elaborate square dance outfits for herself and her husbands. Pearl enjoyed games and mental challenges. She loved to solve jigsaw and crossword puzzles as well as the word jumbles in the newspaper. She also played a tough game of Scrabble and UpWords with family members. She played to win and gave no quarter . . . even to her grandchildren. In one legendary Scrabble game her teenage grandson was able to beat his grandma when he went out playing the word “Czar” on a triple word square. Most of all she loved being surrounded by family, but Pearl also had other interests that might surprise people. When she was a teenager, she took a ride in a Ford tri-motor airplane. It seems flying never lost its appeal because after retiring, she took flying lessons for a while. May her memory also soar on in the thoughts, prayers, and affection of the loved ones she’s left behind.

Pearl King passed away on Tuesday, April 23, 2019 due to a medical condition that was only discovered 10 days earlier. Knowing the end was near, Pearl had precious time to visit with, and say goodbye to, loved ones far and near. She understood... View Obituary & Service Information

The family of Pearl Gaut King created this Life Tributes page to make it easy to share your memories.