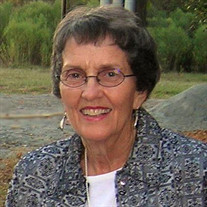 Mildred Lowe Stephenfield, truth-seeker, life-giver, and precious friend, passed away peacefully at home on July 23, 2017. Mildred was an ongoing student, teacher, and celebrant of the beauty, mystery, and adventure of life.  She was generous in sharing her life’s journey with others- whether one on one, in the classroom, or in the many spiritual direction groups she founded.  She relished the challenge of self-exploration and helped many others to find a confident and strong inner peace.  Her calm, yet passionate demeanor was balanced with levity to enjoy the curiosities of the world and to breathe through its challenges.  She encouraged these qualities in others by modeling integrity, mindfulness practice, and kindness throughout her life. Mildred was born on February 3, 1930 in Nashville, TN to Nan (McRae) and William Robert Lowe Sr. As a teenager her family moved to Eagleville, TN where she graduated high school. She went on to college, ultimately earning a Master’s degree in Physical Education and Dance at the University of Tennessee. While teaching at Stetson in Deland, FL, Mildred met her first husband, Addison “Ad” Gilbert. They settled in Sarasota where both taught at the high school and Ad coached the Sarasota Sailor Circus. In 1959 they moved to Tallahassee where Ad became director of the FSU Flying High Circus and their two children, Margo and Robert, were born there. In 1965, Mildred earned a Master’s degree in Counseling from FSU and began work as a guidance counselor. After her first marriage ended, Mildred took a job at the University of Alabama directing the Student Union. During her second year there, she married Denton "Dan" Arthur Stephenfield to whom she was married for over 35 years. She and Dan traveled all over the world and lived for several years in Saudi Arabia and Bolivia while Dan worked there. They settled back in Tallahassee and in their later years, became schoolteachers for Leon County, active in many social causes, and beloved in the Tallahassee community. They remained together until Dan's death in 2003. Mildred’s path was one of continuous learning where she constantly read, wrote, studied and lead workshops and classes. She was generous in sharing her time and insights with others by leading meditation and study groups in her home and local churches. She was committed to her own personal growth as well as that of the many women that she mentored over the years. Never one to turn down an opportunity, escapade or adventure, Mildred visited every continent in the world except Antarctica. At 75, she went on a 2-week safari in Africa. At 77, she surfed in Hawaii and took a Caribbean cruise for her 80th birthday. She loved the beach and made many trips to St. George Island. Mildred was always eager to find something good about any situation. Friends could count on her for support, laughter and inspiration. She easily shared her gentle strength to support others in difficult times and was deeply appreciative of the many caregivers who supported her through the end of her life. Besides her husband and parents, Mildred was preceded in death by her brother, William Robert Lowe Jr., her sister, Clara Lowe Ford, and her stepdaughter, Dawn Stephenfield.  She is survived by her beloved children, Margo Kay Gilbert and Robert Addison Gilbert of Tallahassee; her brother, C.J. "Buddy" (Madge) Lowe of Black Mountain, NC; sister-in-law Joan Lowe of Lewisburg, TN; her grandchildren, Robert (Kallie) Gilbert and Ashley Gilbert of Sarasota and four great-grandsons: Eli, Jaxon, Bowen, and Aaro.  Mildred also leaves a much-beloved stepdaughter, Sally Stephenfield Murphy of Geneva as well as Sally’s children: Ryan, Eric and Jennifer Bleichner and her great-grandson, Bryan. She is also survived by many friends whom she loved and who loved her dearly. Join us for a celebration of Mildred’s life at Unity Eastside Church, 8551 Buck Lake Road, Tallahassee, 32317 on Saturday, July 29 at 2:00 pm.  In lieu of flowers, contributions to Unity Eastside Church are appreciated.

Mildred Lowe Stephenfield, truth-seeker, life-giver, and precious friend, passed away peacefully at home on July 23, 2017. Mildred was an ongoing student, teacher, and celebrant of the beauty, mystery, and adventure of life.  She was generous... View Obituary & Service Information

The family of Mildred Lowe Stephenfield created this Life Tributes page to make it easy to share your memories.