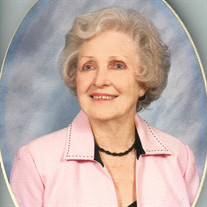 Mavis Florence Sullivan passed away on December 10, 2019 in Tallahassee Florida at the age of 95. Mavis was a loving and devoted wife, mother, daughter, sister, grandmother, great grandmother, aunt and friend. She was preceded in death by her husband, Ned D. Sullivan of 61 years. Mavis was born on August 22nd, 1924 in Greensboro, Florida to Walter and Jessie Brinson. The second youngest of four brothers and four sisters, she grew up in the Greensboro area where she and her siblings all attended Greensboro High School. After graduating from High School she attended Western Union Management School in Gainesville, Georgia, business school in Tampa, Florida and LPN School later on. Education was her number one priority and was stressed to her two children, grandchildren and great grandchildren. Mavis was the manager of the Western Union office in Ybor City, Florida and relief manager in several offices. After becoming a nurse she worked in hospitals where she worked mostly with children and the elderly. She delighted in taking care of each patient. She often said “I didn't know I could be paid for something I loved and enjoyed doing." Mavis also loved gardening and sharing her flowers with family and friends, trying out new recipes, shopping and especially enjoyed the Christmas Holiday Season. She looked forward to the Brinson family reunion (which was held for seventy years) and her many family outings with her children and grandchildren. Mavis was a member of the Order of Eastern Star for fifty plus years and was a Past Matron. She also was a member of Lake Talquin Baptist Church where she was active in Sunday School and Choir. Survivors include two daughters, Patricia Schutte (Dick) of Cincinnatti, Ohio and Pam Davis (Ed) of Fort Walton Beach, Florida; three grand children, Andrew Cowart (Jessica) of Gainesville, Florida; Anne Lange (Brendy) of Midland, Michigan; and Major Bryant Davis (Ali) of Ewa Beach, Hawaii; six great grandchildren, McKensie and Riley Cowart; Eleanor, Vivienne and Stella Lange; and Collyns and Cohen Davis and many nieces and nephews. The family will receive friends at 10:00 AM on Saturday, December 21, 2019 at Lake Talquin Baptist Church, 21335 Blountstown Hwy., Tallahassee, FL 32310. Services will follow at 11:00am. The burial will be at Hillcrest Cemetery, Quincy, Florida, following the service. In lieu of flowers, you may donate to Wounded Warrior, P.O. Box 758516, Topeka Kansas, 66675 or to Lake Talquin Baptist Church (see above address). Lifesong (lifesongfunerals.com or 850/627.1111) is assisting the family with arrangements.

Mavis Florence Sullivan passed away on December 10, 2019 in Tallahassee Florida at the age of 95. Mavis was a loving and devoted wife, mother, daughter, sister, grandmother, great grandmother, aunt and friend. She was preceded in death by her... View Obituary & Service Information

The family of Mavis Sullivan created this Life Tributes page to make it easy to share your memories.

Mavis Florence Sullivan passed away on December 10, 2019 in Tallahassee...