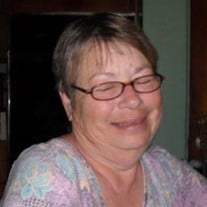 Mary Teresa Swander was born on December 15, 1946 to John and Irene Stokke in Stoughton, Wisconsin. She passed away peacefully after a brief illness on November 7, 2019 in Tallahassee, Florida. Mary attended Janesville Senior High School (Class of ‘65) in Janesville, Wisconsin where she graduated with her lifelong best friend Susan Raby-Price. She went on to college, where she earned her degree in nursing. She married Paul Alan Swander in 1973 and eventually moved to Washington and then to Florida. She was a devoted wife and mother, active in Girl Scouts and 4H. Mary enjoyed many hobbies including crochet, calligraphy and all kinds of crafting. She retired from Tacachale Center, a community for adults with developmental disabilities, and found great purpose and enjoyment from this work. She became, along with her husband, an active member of the Native American community in Ft. McCoy, Florida. She found peace and friendship among the people of the Cox-Osceola reservation, and enjoyed sharing the culture and traditions with her children and grandchildren. Mary is survived by her sister, Sally Olson (Floyd), daughters Dianna Smith and Melissa Swander (Mark). She was dearly loved by her grandchildren, Crisanna, Shuston, Tyler, Mary-Sophia, Jeremy, Melaina and Nova. She had twelve great-grandchildren of whom she was so proud. She is preceded in death by her parents; John and Irene Stokke, her husband Paul, her grandson, Michael Smith, and her sister Jane Helmers (Doug). No services are planned at this time.

The family of Mary Teresa Swander created this Life Tributes page to make it easy to share your memories.