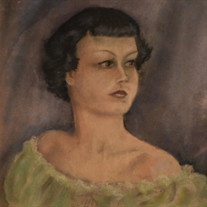 (Portrait of Margaret Harrison at age 17, by her mother, Mattie Coleman Harrison) Margaret Moore Harrison died on Feb 17, 2019, at her home in Havana, Florida. She was born on Sunny View Farm in Blackshear, Georgia on June 23, 1930. Childhood: A child of the Great Depression, Margaret learned to read from mail order books, as a library was not nearby. Her mother, Mattie Coleman Harrison, a teacher and college graduate, suddenly realized that Margaret wasn't "reading" the books. She had memorized them. But her lifetime love of learning and books was sparked. She was graduated Salutatorian from Blackshear High School, and four years later, she left Georgia Southern University (then Georgia Teachers' College) with a Summa Cum Laude Bachelor's degree in Home Economics. At the time, very few professions were available to women, and Margaret knew she wouldn't be satisfied with teaching or baking pies. Professional Life: In the fifties, Margaret became an office manager and announcer, keeping listeners informed of community events at two radio stations, WACL in Waycross, Georgia and WMAF in Madison, Florida. After raising four children in Tallahassee, Florida, Margaret got a Master's in Rehabilitation Counseling from the institution she was most proud to call her alma mater, Florida State University. It was the late sixties, and many women were, like Margaret, taking advantage of civil rights legislation requiring government contractors to promote women to management positions. With her degree, Margaret moved quickly from the steno pool to become one of the first female counselors at the Florida Division of Vocational Rehabilitation. After moving to Austin, Texas in the late seventies, she advanced in job titles and duties at Texas Rehabilitation Commission to become the first woman Assistant Director in the Disability Determination Services Division. Margaret always took pride in her role as an advocate for disabled Texans and her many coworkers who needed help in personnel decisions. Retirement: After retirement in 1996, Margaret had more time to spend doing the things she loved: birdwatching, reading (at least one novel a day of her favorite British mysteries and American crime procedurals), and gardening. Her mother, Mattie, had been a well-known, award-winning daylily hybridizer, and Margaret's garden was a tribute to her mother's legacy. She also inherited her green thumb from her father, Dennis Jeptha Harrison, who was recognized by the state of Georgia as a pioneering tree farmer. Margaret enjoyed traveling with her children on many adventures: Alaska and Las Vegas, a ski trip to New Mexico, Mexico, Canada, taking Amtrak's Coast Starlight train from Los Angeles to Portland, road tripping for a month through seven western states, and a trip to Australia to visit her niece, Sue Harrison. She became President of the Florida State University Booster Club in Austin, Texas. (Go Noles, even in the Lone Star State!) Margaret loved her Seminoles very much and celebrated many FSU students and their academic and sporting achievements over the years. Three years ago, Margaret moved with her daughter, Melinda Lay, to Havana, Florida, to be closer to her beloved FSU and birthplace. (And fried mullet and boiled peanuts. Texans don't know what they're missing.) With birdwatching guide in hand, Margaret had a perfect perch, a leather lounge chair by a spacious sunny window looking out on a pine-fringed back yard, to admire the many hummingbirds and cardinals who feasted from the several bird feeders her daughter, Melinda Lay, and her son, Bob Lay, made sure were always filled. End of Life: Margaret died peacefully, with her children, Melinda Margaret Lay, Robert Clyde (Bob) Lay, Jr, and Martha Anita Rubarth-Lay, and sweet pups, Clyde (her dining companion), and lapdogs Cait and Bodie close by. She is survived by her grandchildren, Christopher Quinton Ruby and his family Sunny and Scarlet Houston and wild brown dog, Zara; Kendra Faith Lay and her husband, Ronnie Yocham; and Liam Robb Rubarth-Lay; her nieces, Brenda Harrison Davis, and Sue Harrison; son-in-law Jim Rubarth-Lay, and daughter-in-law Sue Cavallo Lay. All of her family and many friends not mentioned here will miss her very much. Margaret is predeceased by her youngest son, Dennis Barden Lay, her brothers, Dennis James (Jim) and Fred Coleman Harrison, and her parents, Dennis Jeptha and Martha (Mattie) Coleman Harrison. Thanks and Acknowledgements: The family wish to thank Big Bend Hospice, and in particular, Hospice Nurse Becky and Social Worker Cindy, for their outstanding care during Margaret's last days. In lieu of flowers, the family would like contributions to be made to Big Bend Hospice Foundation at 1723 Mahan Center Boulevard, Tallahassee, Florida 32308-5428.

(Portrait of Margaret Harrison at age 17, by her mother, Mattie Coleman Harrison) Margaret Moore Harrison died on Feb 17, 2019, at her home in Havana, Florida. She was born on Sunny View Farm in Blackshear, Georgia on June 23, 1930. Childhood:... View Obituary & Service Information

The family of Margaret Moore Harrison created this Life Tributes page to make it easy to share your memories.

(Portrait of Margaret Harrison at age 17, by her mother, Mattie...