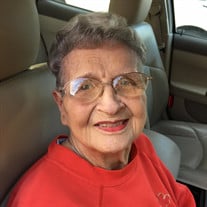 Lois Jean Fussell Hughes, 87, passed away peacefully surrounded by her loving children on January 16, 2018 in Tallahassee, Florida. Lois was born on November 27, 1930 to Harvey Fussell and Josie Inez Bruner in Chipley, Florida. Lois was the youngest of five children, born in the Depression era. Times were tough and her father passed away when she was 16. She entered the Miss Chipley contest in 1947, trading dresses with Eloise Craven because neither of them could afford a new dress. She won, and went on to become the first contestant from Chipley to hold the title of National Peanut Festival queen. That year, she met the love of her life, Jim Hughes, when he accompanied her brother-in-law, Roy Johnson to Chipley on a weekend leave pass from the Air Force. She left Chipley the night of her high school graduation with her sister, Hilma, and moved to Maryland where Roy and Jim were stationed. They married later that year on December 29, 1948. They moved around the world until he retired from the Air Force in 1966, raising three children along the way. They remained together until his passing in 2003. Lois was a caring, selfless person who loved everyone in her life unconditionally. She always put her family first ahead of her needs. She was a lifelong Christian and loved to sing in the choir, play the piano and she taught piano for almost 20 years. She will be truly, truly missed. She was preceded in death by her parents, her husband of 54 years, Rev. Jim Hughes, sisters Zella Peel and Hilma Johnson, her brother Julius Fussell, and son-in-law Thomas Joiner, all of Chipley. She is survived by her children: Phil Hughes and wife Suzanne of Tallahassee, Patricia Joiner of Chipley, and Lea Ann Gates and husband Mac of Havana. She is also survived by her granddaughter, Stephanie Shouppe and husband Billy, her two great-grandsons, Cameron and Caleb Shouppe of Chipley, and her great-great-granddaughter, Faith Elizabeth Bradley of Bonifay. She is also survived by her sister, Hilda Reeder of Pensacola. Private services are planned at a later date. If you wish to make a memorial gift, please make donations to Emerald Coast Hospice in her name. The family thanks the staff for the care they provided to her.

Lois Jean Fussell Hughes, 87, passed away peacefully surrounded by her loving children on January 16, 2018 in Tallahassee, Florida. Lois was born on November 27, 1930 to Harvey Fussell and Josie Inez Bruner in Chipley, Florida. Lois was the... View Obituary & Service Information

The family of Lois Hughes created this Life Tributes page to make it easy to share your memories.