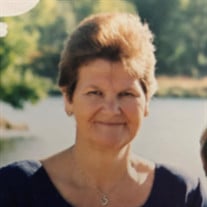 Laura Elizabeth Alday Barnes, 69, of Altha, Florida passed from this life on September 11, 2018 at Blountstown Health and Rehabilitation Center. Libby had resided there for three years in her struggle to overcome a traumatic brain injury. The family sincerely thanks the nurses and staff for their kindness and attentiveness to Libby during this time. Elizabeth (or Libby) had a heart of gold and demonstrated her compassion by helping many in need. She was kind, generous, and gave freely of her time, attention, and love. She dedicated her life to loving and raising children whether they were born to her or not. She loved cooking and canning and spending time with her family. Libby had three daughters with her first husband Bill Grant (aka Shane Hancock) and later in life adopted two more daughters with her late husband Herman Barnes. Libby was preceded in death by her parents, Thomas Manning Alday and Annie Bell Ayers Alday, and brother Joel Marshall Alday. Survivors include daughters, Anna Johnson of Belleville, West Virginia; Shawn Grant Williams of Clarksville, Florida; Heather Watkins Lee of Lewiston, Idaho; Brittany Barnes of Marianna, Florida; and Tiffany Williams of Marianna, Florida. Brothers, Lowell (Buster) Alday of Blountstown, Florida; Larry Alday and wife Sharon of Bon Aire, Georgia; Lynn Alday and wife Pat of Youngstown, Florida; Lee Allen Alday and wife Diana of Altha, Florida. Sisters, June Alday King and husband Joe of Blountstown, Florida; and Joan Alday Watkins and husband Dennis of Lewiston, Idaho. Libby is also survived by eleven grandchildren, four great grandchildren and numerous cousins, nieces, nephews, family and friends. As one of God’s children, His gain is our loss and she will be missed until we meet again in Heaven. A memorial service will be held on Saturday September 22, 2018 at Poplar Head Baptist Church in Clarksville, Florida. The family will receive visitors at 2:00pm and memorial service at 3:00pm.

Laura Elizabeth Alday Barnes, 69, of Altha, Florida passed from this life on September 11, 2018 at Blountstown Health and Rehabilitation Center. Libby had resided there for three years in her struggle to overcome a traumatic brain injury.... View Obituary & Service Information

The family of Laura "Libby" A. Barnes created this Life Tributes page to make it easy to share your memories.