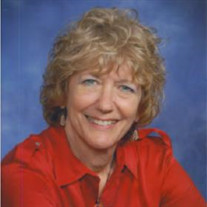 Kris Knab, who quietly turned a law degree and a solid-gold heart into an unparalleled career as the Big Bend’s best-known voice for the voiceless, is now at peace. Kris died Thursday, July 19, at age 67 – after 2½ years of giving pancreatic cancer the fight of its life. With her when she died were her adult children, Erin and Nathan Kenney, and her life partner, Doug Mann. Doug loved Kris’ fantastic memory, forceful intellect, integrity and sharp sense of humor. Nathan will always remember her wonderful life advice, always at a moment’s notice; her Instant Pot creations were pretty amazing, too. Erin thinks her mom would get a kick out of reading that her wardrobe of choice in recent months has included two pairs of sweatpants – one with “Determined” written in large letters down the side, and the other with “BOSS” written in pink.  Jennifer Dritt, Kris’ friend and fellow member at St. Stephen Lutheran Church, said: “Personally, I found her propensity for profanity, and her unparalleled timing in the use of it, absolutely delightful.” She added: “Kris was a light and a force for good. She was completely regular, yet SO extraordinary.” Kris had her professional sendoff in 2016, when she stepped down after nearly 40 years at Legal Services of North Florida. Her friend and nonprofit colleague Kelly Otte captured Kris’ legacy and spirit in the Tallahassee Democrat. Citing tributes from Knab fans near and far, she described someone unsurpassed at giving people a voice through civil legal assistance. Kelly wrote that, right from the start, she noticed Kris standing up when any important change was being proposed and asking, “What about poor people?” Kris always remembered the people whom many of us forget. Even in retirement, despite her health challenges, Kris rose to the occasion. In April 2017, when the Trump administration proposed eliminating funding for the Legal Services Corporation, Kris proclaimed in a guest column in the Democrat: “With no meaningful access to the courts, people will lose faith in and respect for a government that promises ‘justice for all.’” And days ago, in the Florida Bar News, she scolded the Florida Bar Foundation for making changes to the system of funding services for low-income people. Among the cards and letters scattered throughout the family’s living room Thursday were many from people thanking Kris for helping them out of a jam – or just giving them hope. “In all the good you did for our community,” one friend wrote, “your goodness overflowed and spilled into so many people’s lives.” Kris was born in 1951 in Buffalo, New York, to Anna Augustino Knab and Russell “Pop” Knab. She graduated from Florida State University with a bachelor’s in sociology, then earned her law degree at FSU as well. No one who knows her will be surprised by her specialized course work: civil rights and liberties, legal problems of the poor, and public sector labor law. Her resume lists dozens of community service activities, from the Orange Avenue United Tenants Association (beginning in 1983) to the Leon County Commission on the Status of Women and Girls (beginning in 2011). Kris didn’t seek the spotlight – but awards certainly had a way of finding her. She was the first recipient of the Attorney General’s Award for Excellence in Public Service. To Tallahassee Community College, she was a Woman of Courage and Vision. To the Girl Scouts, a Woman of Distinction. To Oasis Center for Women and Girls, a Trailblazer. To the Tallahassee Urban League, a Legend. At least one more award is coming up. On Oct. 19, during a Homecoming reception, the FSU College of Law will honor her with its inaugural Exemplary Public Service Career Award – complete with an oil painting of her hung in the Law School Rotunda. In addition to Erin, Nathan and Doug, Kris is survived by her two brothers, Kurt Knab (Chong Hui Knab) and Russell Knab (Joanie Knab); their many children and grandchildren; her de-facto brother, Theodore Mack; his children; and the children and grandchildren of her stepmother, Margaret Bowron Knab. Kris’ wish was that, instead of sending flowers, you’d make a donation to Legal Services of North Florida. Give online at https://www.lsnf.org/kris-knab-fund/ . Her memorial service will be held at Faith Presbyterian Church at 11:00 AM on Saturday, July 28th, 2018. Lifesong (850.627.1111 or lifesongfunerals.com) is assisting with arrangements. Her family is asking everyone who comes to wear vivid colors. It’s one more opportunity to celebrate the brightness of Kristine Elizabeth Knab.

Kris Knab, who quietly turned a law degree and a solid-gold heart into an unparalleled career as the Big Bend&#8217;s best-known voice for the voiceless, is now at peace. Kris died Thursday, July 19, at age 67 &#8211; after 2½ years of giving... View Obituary & Service Information

The family of Kristine "Kris" Elizabeth Knab created this Life Tributes page to make it easy to share your memories.

Kris Knab, who quietly turned a law degree and a solid-gold heart...