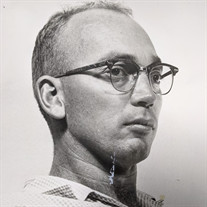 Ken Woodburn, “Florida’s Environmental Godfather,” passed away peacefully at home, on July 8, 2019 with his children by his side. He was 92. He is survived by his daughter, Kenda Woodburn; son, Lance Woodburn; sister, Ruth Wilson, of St. Petersburg, FL; six grandchildren Molly, Weston, Sam, Bill and Jack Woodburn and Rachel Troy; and sister-in-law Betty McKinstry; and five nieces, Thais, Lisa, Valerie, Carla and Sherry and two nephews, Matthew and Paul. He was preceded in death by his beautiful wife of 59 years, Bonnie, and one infant son Kenneth Valiant. They are together once again. Ken was born in Shippenville, PA on December 30, 1926. He graduated from St. Petersburg H.S. in the Class of ’44 and from University of Florida in 1950 with a B.S. under the GI Bill. As an Army Sergeant in WWll he used his medical and exercise physiology skills to rehab injured soldiers stateside. After graduating from UF, he worked as a lifeguard on the beach causing many hearts to flutter and as a postman in St. Petersburg. The love of his life, Bonnie, encouraged him to use his degree and brilliant mind and in 1955, he became a field biologist at the old St. Pete Fla Marine Lab. He saw first-hand how indiscriminate dredging and filling of submerged lands was devastating to the “wonderlands of marine life” and he helped sound the first environmental alarms. During his time at the Marine Lab he helped publish 40 technical publications. One of which was the classic, “An Ecological Study of the Fishes of the Tampa Bay Area”, which he co-authored with, Dr. Victor Springer (emeritus Smithsonian shark expert). Ken helped stop the Cross Florida Barge Canal and in 1957, he helped get the Bulkhead Law passed which established limits for off-shore filling. He worked alongside such greats as Marjorie Stoneman Douglas (fierce Everglade’s warrior and author), Bonnie Eldred (pioneer in Red Tide research) and Marjorie Harris Carr (Florida Defenders of the Environment) as they strove to protect natural Florida for future generations of all living creatures. Ken married Bonnie in 1960. In 1967 he moved his family to Tallahassee where he worked in state government until 1987. During this time he was an environmental advisor to Governors Claude Kirk, Reuben O’Donovan Askew and Bob Graham. Ken is credited with initiating and coordinating crucial state environmental programs including Save Our Rivers, Save Our Coasts and Save Our Everglades. Thus helping to establish Florida’s aquatic preserves and to designate and protect Areas of Critical State Concern. The beautiful Ichetucknee River was among those areas he helped to designate. In 1968 he was awarded the American Motors Conservation Award; in 1968 Sears Roebuck Foundation Award; in 1971, Ken was awarded the John Kilgore Headliner Award by the Capital Press Club and in 1978 he received a Conservation Award from the Audubon Society. A celebration of life is planned for this Sunday, Aug 18th from 2 to 6 pm at the American Legion Hall, 229 Lake Ella Drive Tallahassee, FL 32303. There will be a sermon followed by testimonials and wonderful music that Ken and Bonnie loved. In lieu of flowers please donate to Preserve Vision Florida www.pvfla.org; or to R’Club ChildCare, Inc. (to the Art O’Hara Memorial Fund) www.rclub.net or to Big Bend Hospice www.bigbendhospice.org .

Ken Woodburn, &#8220;Florida&#8217;s Environmental Godfather,&#8221; passed away peacefully at home, on July 8, 2019 with his children by his side. He was 92. He is survived by his daughter, Kenda Woodburn; son, Lance Woodburn; sister, Ruth... View Obituary & Service Information

The family of Kenneth DeWayne Woodburn created this Life Tributes page to make it easy to share your memories.