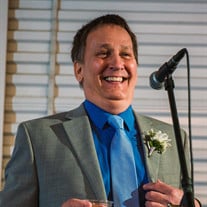 Karl Michael Scheuerman passed away on Friday, September 21, 2018, surrounded by people who loved him. Karl was born on December 8, 1957 in Rochester, New York, to Raymond and Anne (Rapavi) Scheuerman. He was the youngest of four children. Karl earned a Bachelor in Business Administration from the University of Indiana before beginning his law degree at Albany Law School in New York. To be closer to family at the time, he moved to Tallahassee and finished his degree at Florida State University. Over the years, Karl became an important figure in condominium law throughout the state of Florida. He worked for the Division of Business and Professional Regulation early in his career, as a regulatory lawyer and an arbitrator for disputes between unit owners and associations. In that role, he accumulated many amusing stories, which he used to spice up his appearances at a regular annual update seminar sponsored by the Florida Bar. His presentations were eagerly anticipated and literally had attendees “rolling in the aisles.” Karl later went on to work for the law firm of Sachs, Sax, and Caplan, becoming a partner. Throughout the last few years, he worked to spearhead a Florida Bar certification program for Community Association Lawyers, and was among the first class of those certified. His knowledge of and contribution to his field were widely praised. Personally, Karl was kind, generous, hilarious, stubborn, and hard-working. Taking after his Dad, he became an avid outdoorsman and expert fisherman. He enjoyed both wading the flats in search of saltwater species and pulling in large bass from Lake Hall, oftentimes in the evening or at night. Perhaps one of his most notorious traits was his steadfast ability to follow his own internal compass—often resulting in memorable situations, both funny and challenging. Karl wasted no time worrying about what anyone thought of him, and instead lived every moment of his life as his most authentic self. He was a very educated man who loved nature, camping, tennis, yoga, horror movies, painting, gardening, classical music (especially Bach), old Kung fu movies, candy, and his daughters. He could remember millions of law citations, but had no idea when anyone’s birthday was. At no point did he allow his illness to define him—so much so that it was often difficult to remember that he was ill at all. He kept his humor and mischievousness until the very end. Karl was preceded in death by his father Ray Scheuerman and mother Anne Scheuerman of New York. He is survived by his sisters Marie Masson and Christina Apeland of New York, brother Paul Scheuerman (Jeanne) of Kansas, daughters Haley Shimer (Steve) of Florida and Karly Scheuerman of Colorado, nieces Jennifer Norton (David) of New York, Tracy and Kerry Apeland of New York, and an astonishing number of nephews Joshua Masson (AnaMaria) of Iowa, Vincent Scheuerman of Montana, Christopher Scheuerman (Monica) of Virginia, Daniel Scheuerman (Jessica) of Nebraska, Mark Scheuerman (Liz) of Maryland, Francis Scheuerman (Olivia) of Missouri, and Philip Scheuerman of Missouri. A memorial Mass is planned for Saturday, October 6 at 11am at the Co-Cathedral of St. Thomas More. In lieu of flowers, please considering donating to the Lungevity Foundation or Big Bend Hospice.

Karl Michael Scheuerman passed away on Friday, September 21, 2018, surrounded by people who loved him. Karl was born on December 8, 1957 in Rochester, New York, to Raymond and Anne (Rapavi) Scheuerman. He was the youngest of four children. Karl... View Obituary & Service Information

The family of Karl Michael Scheuerman created this Life Tributes page to make it easy to share your memories.