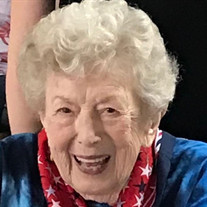 Joann Webb Tallahassee - Vera Joann Forbes Webb of Tallahassee, Florida died on September 26, 2019. Joann was born in Mountain Grove, Missouri, the seventh of ten children. She grew up in a farmhouse with her big family and graduated from Mountain Grove High School in 1949. Directly following graduation, she went to work for the Federal Government at Fort Leonard Wood, Missouri, and soon met the love of her life, Robert A. Webb, a Florida native. Joann and Bob married in 1956 and moved to Tallahassee. Joann worked for the US Forest Service for 30 years and often regaled people with her appearances as Smokey Bear and Woodsy Owl. After retiring from federal service, she returned to work for the Florida Department of Environmental Protection for another 10 years. Following her final retirement, she gave 100% focus to living a full and happy life, embracing her children, grandchildren and family with open arms and traveling with and visiting them at many places around the world. Joann's love of family and friends was pervasive and infectious, her generosity and kindness an example to all, and her faith in God steadfast. She relished in making life fun and active, spending time with people she loved at her family coast house on Alligator Point, Ladies that Dine, Smokey Bears and FSU football. If you knew Joann, you have known the true meaning of friendship. Joann is survived by her children Robert A. Webb, Jr. (Susan), Marianne Webb Kraszewski (Henryk), Grandchildren Dylan Webb (Bailey), Bailey Webb, Robert Kraszewski, Amelia Kraszewski, three great- grandchildren, Jack, Josephine and Beau, and siblings Ted Forbes (Pauline), John Forbes (Barbara), Robert Forbes, Clyde Forbes and Jean Brewer, and sister-in-law, Barbara Miller. She was preceded in death by her husband Robert A. Webb, Sr., parents Burley and Gladys Forbes, her brother Frances and sisters Zetta Mae Trautman, Mary Forbes Worrel and Dixie Forbes Hutchinson. A graveside service will be held at 10:00 AM on Wednesday, October 2 at Roselawn Cemetery with a Memorial Service at 11:00 AM at Faith Presbyterian Church. A reception will follow the Service in the Fellowship Hall. In lieu of flowers, donations may be made to Faith Presbyterian Church or the charity of your choice. Lifesong (lifesongfunerals.com or 850/627.1111) is assisting the family with arrangements.

Joann Webb Tallahassee - Vera Joann Forbes Webb of Tallahassee, Florida died on September 26, 2019. Joann was born in Mountain Grove, Missouri, the seventh of ten children. She grew up in a farmhouse with her big family and graduated from... View Obituary & Service Information

The family of Joann Webb created this Life Tributes page to make it easy to share your memories.