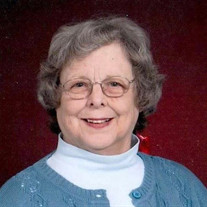 JoAnn Romike Hamilton, 76, of Tallahassee, passed away on August 17, 2017 in Tallahassee. She is survived by her husband of 54 years, Thomas Hamilton. A funeral mass will be held at 11:00am, Monday, August 21 at St. Louis Catholic Church in Tallahassee. JoAnn Romike Hamilton was born in St. Louis, Missouri to Joe and Verna Ann Romike on January 16, 1941. She graduated Perryville High School at the young age of 16. She then attended Harris Teacher’s College in St. Louis, where she received her degree at 20 years of age. Taking courses at Pope Pius XII Memorial Library, she met the love of her life and husband of 54 years, Thomas Hamilton. After starting a family and raising three children, she then received her Master’s Degree in Education from Florida State University. JoAnn was a lifelong member of the Epsilon Eta Chapter of the Delta Zeta Sorority, receiving the order of the Golden Rose award in April 2009. After receiving her degrees, she continued to be a lifelong student of a variety of subjects. After dedicating 30 years to teaching elementary students, JoAnn retired from the Leon County School District in 2003. Her love of teaching was evident in a quote she shared with her family: “I cannot believe I am paid to spend time with these precious children.” After retirement, she continued teaching Bible classes at St. Louis Catholic Church. JoAnn was an accomplished pianist. She also enjoyed nature through gardening, birdwatching, traveling, and walking along the shores of the Gulf of Mexico collecting seashells. JoAnn often crafted gifts for her loved ones. Other survivors include her three children, JoAnn Calabrese (Joseph) of Tallahassee, Thomas Hamilton (Lisa) of Crawfordville, and Theresa Hamilton of Stone Mountain, GA; grandchildren, Kristen Stienstra, Amanda Roberts, Rebecca Roberts, Savanah Hamilton, Alison Hamilton, Carmen Calabrese, Ryan Hamilton; and great-grandchildren, Dylan Roberts, Wyatt, Sawyer, and Dixie Stienstra, and Lillian and Leah Ledendecker. JoAnn is preceded in death by her parents Joe and Verna Ann Romike and her granddaughter Katy Calabrese. In lieu of flowers, memorial donations may be made to Big Bend Hospice.

JoAnn Romike Hamilton, 76, of Tallahassee, passed away on August 17, 2017 in Tallahassee. She is survived by her husband of 54 years, Thomas Hamilton. A funeral mass will be held at 11:00am, Monday, August 21 at St. Louis Catholic Church in... View Obituary & Service Information

The family of JoAnn R. Hamilton created this Life Tributes page to make it easy to share your memories.

JoAnn Romike Hamilton, 76, of Tallahassee, passed away on August...