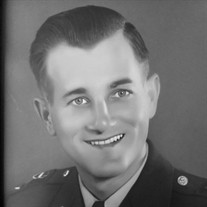 James “Jim” Arthur Stidham, Sr., soldier, engineer, father, brother, volunteer, bridge aficionado (cards and actual bridges), pickleball champion, kayaker, comedian, passed away peacefully in the early morning hours of April 27, 2018. As was his style, he left quietly so he would not wake those sleeping nearby. Jim, 90, was a Southern gentleman to the core. Jim is predeceased by his wife of 60 years, Bettijo Pickle Stidham. Jim was born in the Polk County citrus-belt town of Auburndale, FL in 1927 to Reese and Annie (Clyde) Stidham. Along with two sisters and a brother, he grew up in Lakeland, Florida. Jim was a hard worker from the start. He shared a paper route with Lawton Chiles, and worked long hours at the Lake Morton Pharmacy, where he honed his solid work ethic. He played clarinet in the Lakeland High School band, where he met his bride-to-be. Following his graduation from Gordon Military College in 1945, he enlisted in the U.S. Navy, serving in the Philippines during World War II. Jim returned to Lakeland and married Bettijo Pickle, his high school sweetheart and companion for the next 60 years. He earned a degree in Statistics from the University of Florida while in the ROTC program. Shortly after, he was called to active duty by the U.S. Army Corp. of Engineers. Jim spent the next 22 years with the Army, in service of his country. Combat duty in Korea, two tours in Vietnam, as well as tours of duty in Germany and Panama (Canal Zone) comprised the majority of his service. His fondest memory was working on the Titan Missile Project in Kansas, and his send off party at the Officer's Club, ending his second deployment in Vietnam. For his devotion to duty and personal dedication throughout his career, Jim was awarded the Bronze Star and Legion of Merit. While in the service, he received an engineering degree from Missouri School of Mines, and an MBA from FSU. He retired as a Lt. Colonel in 1973. Before starting his own engineering firm in 1983 (Jim Stidham & Associates), he spent a decade working for the Bureau of Water Resources and the Northwest Florida Water Management District. Jim retired from his company in 2004, as JS&A celebrates it's 35th year in 2018. Jim moved the family to Tallahassee in 1971, and applied his relentless energy to serving the Tallahassee community. He had countless leadership roles in organizations, including President of American Society of Civil Engineers; Tallahassee Assoc. of Bands, Lincoln High School Boosters, Lafayette Park Little League Commissioner, and Cubmaster of Pack 112. He was an enthusiastic member of Capital City Rotary Club right up to the final months. He especially loved working on the Daddy/Daughter Dance and the Rotary Youth Camp. He was awarded the Homer Award for his endeavors on these projects. Finally, Jim was a proud member and officer of the Old Timers Club.The word 'service' comes up continually when speaking about Jim (he always carried two handkerchiefs. One for him and one for you). In addition to his long hours at work, and rampant volunteerism, he still found the time to be a devoted and adored father to Pam (Stidham) Bullock; Jim; Jr.; and John Mark; and to his grandchildren, Sean and Devon Bullock; Ian, Sofia and Nina Stidham. Jim was also a mentor and father-figure to many. But possibly his greatest gift was his ability to make you feel like the only person in the room. He made you feel like you mattered. He had such a deep capacity for caring, and an aura of kindness that people found infectious. Jim was blessed with the dry sense of humor, and flawless delivery natural to old Floridians. With years of military experience to draw from, and what can only be described as comedic DNA, he was never short of a funny story, joke or song for any occasion. Jim loved March Music, Big Band Swing, Jazz, and late in life discovered a real love for Bluegrass. “Home Grown Tomatoes” and “Dropkick Me Jesus (Through The Goalposts of Life) were considered strokes of genius and buttermilk and boiled peanuts were delicacies. Jim was a Florida Gator through and through, and passed this passion on to his two sons. He was especially fond of the Softball team. Cheering for FSU was not uncommon for him. The Noles were part of the community he served, and Tallahassee meant so much to him. Jim was also a longtime member of the East Hill Baptist Church community, where he was an usher and Sunday School Teacher. He was a man of Faith, and it showed in everything he did. He walked the walk, and let others talk. Jim was a Southern gentleman to the core. There will be a visitation from 12-2 pm at East Hill Baptist Church on May 5, 2018 and will be followed by a Memorial Service at 2 pm. The interment will follow at Meadow Wood Memorial Park on Timberlane Rd. In lieu of flowers, please make donations to Northside Rotary Club of Tallahassee (earmarked for Rotary Youth Camp), or just lend a hand to the next person that asks you for help.

The family of Jim Stidham created this Life Tributes page to make it easy to share your memories.