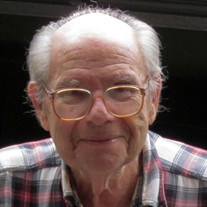 Jerome (Jerry) Lloyd Altman, 89, retired engineer and independent thinker, died on Saturday, January 17, 2015, at his home in Tallahassee, FL after a long illness. Jerome was born on November 13, 1925 to Celine (Rosenfeldt) and Solomon Altman in New York, NY. He is survived by Janine (Weil) Altman, his loving wife of 66 years, and children Jerry Altman and wife Ellen Berkowitz of Tallahassee; Kathryn Deshpande and husband Jon Katze of Memphis, TN; and grandchildren Alex Altman of Tallahassee, Prudence Katze of Brooklyn, NY, and Jack Katze of Fayetteville, AR. Extended surviving family residing in France include Jean-Michel Rosenfeldt; Jacques (Cristianne) Torini and children Frank and Kevin; Laurence Torini and children Iris and Elliot; and Michel Vorbe. Although his parents emigrated from France to New York, they moved back to Paris when Jerome was a toddler. There he spent his formative years. He graduated high school from the Lycèe Pasteur in Paris and later met his future wife, Janine. At age 17, he escaped the Nazi occupation by crossing the Pyrenees Mountains on foot into Spain, later joining his father in NY. Drafted by the Army, Jerome served as a Signal Corpsman in the Pacific theater. Upon his discharge he was reunited with Janine, and they married in 1948. Jerome attended Brooklyn College, graduated from the Massachusetts Institute of Technology, and received a Masters in Electrical Engineering from Northeastern University. He and Janine made Newton, Massachusetts their home, where they raised their two children. Jerome was employed as an engineer at Raytheon and later the MITRE Corporation, where he specialized in microwave technology and helped develop radar defense systems, including AWACS, an airborne radar system widely used by the Air Force. Jerome taught night school at Northeastern and his textbook “Microwave Circuits” was published in 1965. Jerome was a caring family man and a bon-vivant, intrepidly exploring the culture and streets of Boston, his favorite city after Paris. His hobbies included playing classical piano, collecting stamps, oil painting, and walking his dog. He appreciated beauty in its many forms; from eating ice cream to oysters, being in nature or museums, viewing Bergman films or Woody Allen, attending fledgling musician or professional concerts, and reading Simenon and John D McDonald. He appreciated beauty in its many forms, from good food to nature and the arts. Jerome and Janine traveled often to France and other European countries, and explored parts of Canada and the US. Until 2014, Jerome and Janine spent 25 years as “snow birds,” driving south to Tallahassee to beat the first New England snowfall, and returning to Massachusetts in the spring. Although Jerome was a private man, his family and friends never failed to experience his kindness, humor, and joie de vivre. His love of independence, family, beauty and life is a legacy embraced by his children and grandchildren. He will be greatly missed. In lieu of a funeral service, a private family memorial is planned.

The family of Jerome Altman created this Life Tributes page to make it easy to share your memories.