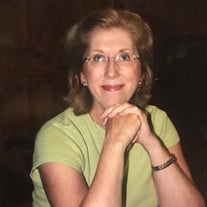 Jane Prosser, of Fort Braden, passed away peacefully at her home on November 15, 2019 at the age of 71. She was preceded in death by her husband of 43 years, Randall Prosser. Jane was the daughter of Ralph Morris and the late Kathryn Morris. Jane is survived by two sons, Nathan (Ashley) Prosser and Matthew (Kerry) Prosser; three grandsons, Finn, Eastton and Gunner; two granddaughters, Emma and Elizabeth, one sister, Ann VanZandt (David) of Crestview, FL and one brother-in-law and sister-in-law, Dan and Anice Prosser. Jane was born in Jefferson, Iowa. Her family moved to Miami in 1959 seeking new opportunities and warmer weather. In 1968, Jane moved to Tallahassee to attend The Florida State University, and enrolled as an Elementary Education major. While she attended FSU, she met her future husband and they were married in August 1970. Jane and Randall felt raising their family was priority, so Jane took a leave of absence from teaching to care for Nathan and Matthew. Later, in 1989, Jane began working at Fort Braden School, teaching 3rd grade, where she shaped many young minds. Many former students still remember her fondly. In 2005, Jane retired and began to travel with Randall. They took several trips to small towns in the southeast and “Old Florida” areas. In her spare time, Jane enjoyed traveling with Randall, gardening, painting and attending art class, taking morning walks with friends in the neighborhood, and always preparing Coke floats for any of the Prosser kids that spontaneously arrived at her doorstep. Most of all, Jane loved her family. She was always quick to brag on Nathan and Matthew, the men they became, and the families they were raising. In Jane’s words, “my best decision was to have children who chose strong women to become their wives.” She adored her family and was so proud of the legacy she left behind. A Memorial Service will be held at 10am, Saturday, November 23, at Lake Talquin Baptist Church. Family will receive friends one hour prior to the service. In lieu of flowers, the family requests memorial donations in her honor, to Big Bend Hospice, 1723 Mahan Center Blvd., Tallahassee, FL, 32308. Tholley and Sarah Taylor with Lifesong, are assisting the family with arrangements, 850-627-1111.

Jane Prosser, of Fort Braden, passed away peacefully at her home on November 15, 2019 at the age of 71. She was preceded in death by her husband of 43 years, Randall Prosser. Jane was the daughter of Ralph Morris and the late Kathryn Morris.... View Obituary & Service Information

The family of Jane Prosser created this Life Tributes page to make it easy to share your memories.

Jane Prosser, of Fort Braden, passed away peacefully at her home...