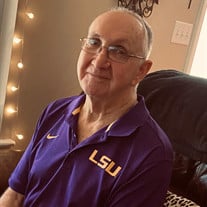 It with extreme sadness that we announce the passing of James Harry “Jimmy” Hubert, 78, of Tallahassee, Florida. He passed away on February 22, 2022, at Tallahassee Memorial Hospital, with his family by his side. He will be deeply missed by many. He was one of “the good ones” a kind, gentle man who loved doing for others. He loved his family unconditionally and unselfishly. Jimmy was born on December 21, 1943, in Baton Rouge, Louisiana, to Armand Joseph Hubert and Lillian Aucoin Hubert, the youngest of ten children. Jimmy attended Baton Rouge High School. In 1964, he met Linda Cummins one night at the local Hoppers Drive-in, and they married the following year, on May 15, 1965. They started their family in 1969 with the birth of their first child, a daughter, Kim Hubert Kimberly, followed by a son, Randy James Hubert, and lastly their youngest daughter, Laura Renee Gentry. Jimmy has seven grandchildren: Lily Guest, Abby Kimberly and Katie Kimberly, Josh Hubert, Miranda Mathison, Cayla Szalay, and Katlin Coleman. In 2019, Jimmy retired from Walmart, where he was employed for 23 years. Jimmy worked in the supermarket and grocery industry for over 60 years, primarily in management. Later he “slowed down” and worked in the produce department at Walmart and was known as the “banana man – yeah buddy!” He was a very hard-working man who rarely took a sick day. His co-workers became his friends. Since retiring, he spent his time with his wife and their immediate family doing the things he loved the most: watching sports, especially LSU Football and the Saints and PGA golf. He loved being outside in sunshine, the beach and going for walks. He loved eating just about any food, especially Cajun food and sweets. It was rare to see Jimmy without a smile on his face; he never met a stranger, and anyone who met him came to love him. He loved hard and was fiercely loved by everyone around him. He leaves behind to cherish his memory, his loving wife of 57 years, Linda Cummins Hubert. Other survivors include two sisters, one brother, his three children, seven grandchildren, and several nieces and nephews. He was preceded in death by his parents and six siblings. In honor of Jimmy’s wishes, in lieu of a traditional service, the family will host a party to celebrate his life. “Jimmy Day” is scheduled for April 2, in Tallahassee, FL, with details to follow. Until then, “alright, OK!”

It with extreme sadness that we announce the passing of James Harry &#8220;Jimmy&#8221; Hubert, 78, of Tallahassee, Florida. He passed away on February 22, 2022, at Tallahassee Memorial Hospital, with his family by his side. He will be deeply... View Obituary & Service Information

The family of James Harry "Jimmy" Hubert created this Life Tributes page to make it easy to share your memories.

It with extreme sadness that we announce the passing of James...