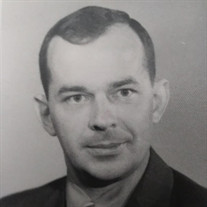 James Edward Conley, Jr. of Crawfordville, FL passed away Wednesday, May 5, after a short illness. He is survived by his wife, Ruth Ann Conley; four children, Michael Alan Conley of Hastings, MN., David Edward Conley (Paula) of Tallahassee, Mary Elizabeth Conley of Crawfordville and Jean Marie Hampton of Bryson City, North Carolina. He was preceded in death by two children, Ann Marie Conley and Rebecca Lynn Meade. Also surviving are 11 grandchildren, Justin James Lee Conley (Rachel), Daniel Alan Spencer (Chloe), Dylan Neil Watson, Evie Alexandra Fatouros (Jason), Harley Michelle (Patrick), Henry Lee Meade (Isabella), Shelby Kansas Meade, Amanda Ann Thornton, Brian Michael Gum, Sevin Ann Hampton, and Wyett Aaron Hampton; four great-grand-children, Kye Matthew and Paizley Rain Fatouros, and Justice James and Ahava Marie Conley; siblings Kathleen & Glenn Pope of Richmond, Va., & Carl Joseph & Connie Conley of Poland, Ind. Jim was preceded in death by his parents, James Edward Conley Sr. and Catherine Lillian Conley of Terre Haute Ind. as well as a brother and sister-in-law, Alan Lee and Loretta D Conley, also of Terra Haute. Mr. Conley was born in Terre Haute, Indiana on July 6, 1935. After graduating from high school he attended Indiana University for a year before switching to and graduating from Indiana State in 1965 with a degree in business. As an adolescent, and while attending school, he worked for his father at his business, The Vigo News Agency, in Terra Haute. During this time he served a number of years in the National Guard, was very active in politics, and was an active member of the Terre Haute Optimist Club. Upon graduation he accepted a position as salesman for Sears Roebuck & Co. and spent the largest part of his career with them, moving many times as his career advanced. Customers were friends, and he did his job well. After retiring in Tallahassee, Florida, he settled there for a long while, often volunteering to work at Sears to see old friends and customers! He loved his work, but he loved his family more, and in 2014 he moved to Crawfordville to be closer to his children and grandchildren. In 2019 he moved to North Carolina and lived with his youngest daughter Jean and her family. He later returned to Florida where he joined his son Dave and his family in their home. Always a lover of fast food, everyone at McDonald's, Burger King, and Hardee's knew him. He never failed to follow up with a long walk along the beach he so enjoyed. Panama City was his idea of Utopia! Mr. Conley loved to watch the news on TV and to read, especially about WWII. He was an avid FSU fan and never missed watching a game on TV. Seminole paraphernalia filled his room and car. Jim was a gregarious, friendly person who never met a stranger. He smiled and waved at everyone, especially if they were wearing Seminole clothing. He was a wonderful father, devoted husband and friend to all. As one of his children remarked, "He was the happiest person I have ever known." He loved and was loved. He will be missed.

The family of James Edward Conley Jr. created this Life Tributes page to make it easy to share your memories.