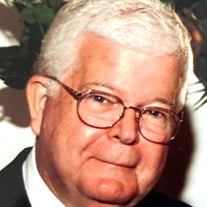 Mr. James Hubert Childers, 82, of Tallahassee, died Saturday, April 10, 2021, at his home surrounded by his loving family. James was born on August 7, 1938 in Winter Haven to Vivian P. Childers and Thomas J. Childers. He is predeceased by his parents, brother, Thomas J. Childers, Jr., and sister, Joyce Edwards. James attended the University of Miami and was a member of Kappa Alpha Fraternity. He was a pioneer in the grocery industry and retired as the vice president and director of grocery merchandising for Winn-Dixie Stores, Inc. in December 1998. He began his 43-year career as a part-time bag boy in Miami in 1953. By 1958 he became a store manager and continued to advance in management, operational, and manufacturing related roles. He was promoted to director of manufacturing and vice president of Winn-Dixie Stores, Inc in 1976. In 1988 he was promoted to the corporate office as director of grocery merchandising. Upon his retirement, colleagues noted that he exemplified Winn-Dixie’s “promote from within” philosophy and played an important role in helping the company to expand, evolve, and grow. Along with his career at Winn-Dixie, James was also an innovative and driving force in other food related areas. He served as the former chairman of the National Frozen Foods Association and was elected member of the Frozen Food Hall of Fame in 1996. In addition to his industry contributions, he was a successful restaurant entrepreneur and investor. Faith and service were foundational to James' life. He was a former chair, elder, and member of Christ Presbyterian Church, a 32nd Degree Scottish Rite Freemason, Arlington Masonic Lodge no. 309, a member of the York and Scottish Rite, a member of the Morocco Shrine Temple and Royal Order of Jesters, Court 90, and the recipient of the Silver Beaver Award for distinguished service to youth from the Boy Scouts of America. He is survived by his wife of 60 years, Marilyn M. Childers; daughter, Jennifer Childers; son, Wayne Childers and daughter-in-law, Susannah Childers; grandson, Raymond Huston, Jr.; and granddaughters Kaley Huston, Samantha Childers, and Leah Childers. Known by some as “Pops” and “Dee,” he will be deeply missed by his family and friends who have many wonderful memories to cherish in his absence. His family likes to think that Dee is sitting on a dock on a warm sunny day, with an ocean breeze at his back, casting his line and waiting patiently for the fish to bite. A small memorial service will be held at Christ Presbyterian Church at a future date. In lieu of flowers, donations can be made to Christ Presbyterian Church’s Sanctuary Piano Fund (CP - Piano Fund) or Big Bend Hospice. “Go rest high on that mountain; Son your work on earth is done. Go to heaven a-shoutin' Love for the Father and the Son.” - Vince Gill

Mr. James Hubert Childers, 82, of Tallahassee, died Saturday, April 10, 2021, at his home surrounded by his loving family. James was born on August 7, 1938 in Winter Haven to Vivian P. Childers and Thomas J. Childers. He is predeceased by his... View Obituary & Service Information

The family of James Hubert Childers created this Life Tributes page to make it easy to share your memories.