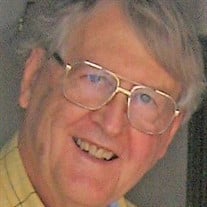 Jack Smith, 86, passed away peacefully in Tallahassee, Florida on Sunday, February 18th, 2018. His family held a private memorial service on February 23, 2018 at the Francis Chapel at Westminster Oaks in Tallahassee. Jack was the second child and first son born to Joseph George Smith and Violet Esther (Wilson) Smith. He was born on October 29th, 1931, in a farmhouse near Delta, Colorado. As the time was near to the bottom of the Great Depression and money was scarce, the physician's fee for the delivery was paid with home-made wine provided by Jack's grandmother, Annie Smith. Public sales of wine and spirits were banned at the time, making home-made wines valuable. Violet was from the south and wanted her first son to have a southern name. She chose Jackie Lee. After moving back and forth between Colorado and Utah for several years, the family moved permanently to Ogden, Utah when Jack was 5 years old. He grew up in Ogden and graduated from Ogden High School. As a young man Jack worked a variety of jobs, the most memorable of which was 3 ½ years working for Owen Wangsgard at Wangsgard's Market in Ogden. He attended Weber Junior College and the University of Utah, earning a bachelor of science degree in chemical engineering. Later, he earned bachelor's and master's degrees in business administration at Idaho State University (ISU). Jack was a registered professional engineer. He served eight years in the U.S. Army Active Reserve, rising to the grade of master sergeant. Jack was introduced to his future wife, Barbara Heather Jackson, by a mutual friend, on the steps of the First Presbyterian Church of Ogden. The couple were married two years later, in July of 1957, in that same church. After graduation from the University of Utah, Jack worked for the Mountain Fuel Supply Company (Salt Lake City) and Bechtel Corporation (San Francisco). In 1958, Jack and Barbara moved to Pocatello, Idaho, where Jack joined the J.R. Simplot Company. While at Simplot, Jack launched new programs in research and development, environmental affairs, and strategic planning. His Service with Simplot lasted until 1989, at which time he was a vice president in the company's Minerals and Chemical Division. Upon his retirement from Simplot, Jack joined the faculty of the College of Engineering at ISU, where he taught until 1994. During his working years, Jack was appointed to a task force in 1968 by the U.S. Department of Health, to study air pollution in the phosphate industry. Beginning in the early 1970s, he served on the environmental committees of numerous professional organizations, including the Fertilizer Institute (Washington, D.C.), the Idaho Association of Commerce and Industry and the Idaho Mining Association. Jack was also active in the American Institute of Chemical Engineers, serving one term as president of the Idaho Section, and co-sponsoring a water pollution control symposium with his counterpart in the American Chemical Society. While teaching at ISU, he organized a series of conferences in Pocatello, Idaho Falls and Boise, covering hazardous waste and hazardous material management. Jack was a family man and enjoyed music and sports, especially tennis and flyfishing. In retirement, he read extensively (especially history), wrote several essays chronicling family history, resumed his life-long hobby of acoustic guitar – jazz, mostly – and enjoyed ISU Bengal sports, the Idaho outdoors, and the rhythm of life together with Barbara in Pocatello. Jack and Barbara relocated to Tallahassee, Florida in 2016, to be closer to family and warmer climes. Jack was preceded in death by his parents, Joseph and Violet Smith and his sister Phyllis Jeannine Butler (and husband Milt). After more than 60 years of marriage, Jack is survived by his wife Barbara, his brother Greg (and wife Liz), daughter Beverly, son Leland (and wife Lori), granddaughters Gwendolyn and Johanna, step-grandchildren Matt, Clint (and wife Kelly, children Adelyn and Luke) and Kelli (daughter Lucy). The family thanks our dear friends and relatives for their many kindnesses during this time. In lieu of flowers, special memories and thoughts may be shared in Jack’s honor at lifesongfunerals.com, search tributes for Jack L. Smith.

Jack Smith, 86, passed away peacefully in Tallahassee, Florida on Sunday, February 18th, 2018. His family held a private memorial service on February 23, 2018 at the Francis Chapel at Westminster Oaks in Tallahassee. Jack was the second child... View Obituary & Service Information

The family of Jack L. Smith created this Life Tributes page to make it easy to share your memories.