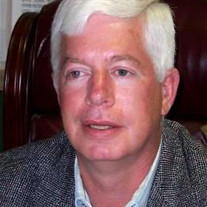 Guy E. (Sandy) Burnette died on November 8th after a five year battle with Corticobasil Degeneration. Sandy passed away at home attended by his wife of 42 years, Susan, his younger son Kevin, and with aid from Hospice. Kevin’s selfless decision to return home allowed his father to remain in a safe and loving environment during the final two years of this terrible illness. Sandy was the proud descendant of two Tampa founding families, the McKay’s and Gutierrez’s. His great-great-grandfather James McKay settled his family in Tampa in 1846. He helped develop the Port of Tampa, built the county’s first permanent courthouse, and served as one of its first mayors. His grandfather, D.B. McKay, served as mayor for five terms and owned the Tampa Times newspaper. Sandy’s mother Celestina McKay Burnette joined the Women’s Army Corps, during W.WII, rising to the rank of Major, retiring when she married Air Force Colonel Guy E. Burnette, Sr. Raised in Tampa, Sandy went to Jesuit High School before attending Vanderbilt University. After graduating in 1974, he enrolled at FSU’s College of Law where he graduated in 1977. Sandy worked as an attorney for over 38 years, with a practice primarily dedicated to civil litigation, forensic fire consulting, and fire service/law enforcement training. Sandy was a certified instructor at the Federal Law Enforcement Training Center/ATF National Academy, the Pat Thomas/Lively Law Enforcement Training Center, and the Florida Fire College. He delivered lectures at conferences and training academies throughout the world and devoted himself to numerous organizations dedicated to fighting arson and insurance fraud. Sandy was a Director of the IAAI where he served 35 years as a Legal Advisor to their Florida Chapter, was a past President of FACAP, and was a life member of both organizations. He also served as past Chair of the Property Insurance Law Committee of the American Bar Association. His work earned him numerous accolades including the Award of Recognition from the Department of Justice and the Silver Hammer Award from the Vice President of the United States. Sandy was recognized as an AV Preeminent Attorney by Martindale-Hubbell, the highest peer review rating in the legal profession. Sandy will be remembered by his many friends for his taste for Arturo Fuente cigars, his unique and wonderful wit, and his love for his favorite football team, the Seminoles. His wife and children extend thanks to all the close friends and family who have delivered boundless help and support during these difficult years. We especially thank a particular group who to Sandy defined the word friend: Hulon Williams, Julio Muniz, Bruce Ely, Ken Keebler, Jack Ward, Joe Toscano, Bill Lundy, Keith Pierce and Bill Watson. We also acknowledge with grateful hearts the truth that God’s love does indeed provide a light through even the darkest days. Sandy is survived by his wife Susan, sons Kevin and George, George’s wife Leslie, and Sandy’s sister, Lura Burnette. A memorial service will be held in Tampa at Palma Ceia Presbyterian Church on January 6, 2018 at 11:00 A.M. In lieu of flowers, the family would like to ask that donations be made, in Sandy’s name, to the Leon County Humane Society, located at 413 Timberlane Road, Tallahassee Florida 32312.

Guy E. (Sandy) Burnette died on November 8th after a five year battle with Corticobasil Degeneration. Sandy passed away at home attended by his wife of 42 years, Susan, his younger son Kevin, and with aid from Hospice. Kevin&#8217;s selfless... View Obituary & Service Information

The family of Guy "Sandy" E. Burnette created this Life Tributes page to make it easy to share your memories.