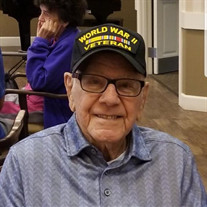 Guillermo (William) Bairan, known to family as “Willie” and to friends as “Bill”, age 96, passed away peacefully on March 14, 2020 in Tallahassee, Florida. Mr. Bairan was born in Key West, Florida, the son of Domingo Bairan and Caridad (Castillo) Bairan. Growing up in Tampa, Florida, he joined the Navy in 1942. He served in World War II and was involved in the D-Day invasion before being Honorably Discharged after 6 years of service after which he joined the Merchant Marines. He later became an X-Ray Technician, eventually settling with his family in Kennesaw, Georgia. He worked at Kennestone Hospital in Marietta, GA where he retired as Assistant Chief of X-Ray. Mr. Bairan was intensely loyal to his family, he was always fully dedicated to any task or project he began, and was constant in his teasing of loved ones and friends. He had a lifelong passion for dancing, and enjoyed camping, boating, fishing and golfing. Mr. Bairan is survived by his loving wife of 62 years, Annette Bairan; his children, Cindy Plouffe (Marcel), Adrian Bairan (Brenda) and Linda (Bill) Pardue; his grandchildren, Savanna Christy, Ian Plouffe, Ryanne Gardner, Brett Horick and Kyle Horick; his great-grandchild, Asher Gardner; his siblings, Jose Bairan and Pedro Rivera. He was predeceased by his brother, Edelmiro Rivera. An intimate service will be held for immediate family at the National Cemetery in Tallahassee, FL on Tuesday, March 17, 2020. In lieu of flowers, please consider a donation to the following charities: Fisher House Foundation or the Alzheimer’s Foundation of America.

The family of Guillermo (William) Bairan created this Life Tributes page to make it easy to share your memories.

Guillermo (William) Bairan, known to family as “Willie” and to...