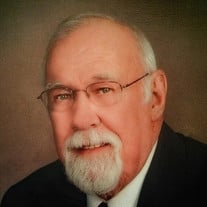 On December 1, 2020 Gary had a peaceful transition from his home, where he shared his life with his daughter and her family, to his heavenly home with Our Heavenly Father and the many loved ones who had gone before. Gary was born to Crystal Irene Joseph and Fred Garrison Vaughn on March 12, 1933 in Beaver Dam, Wisconsin. His father was killed in an accidental shooting in Central America before he was born. When he was 5 years old his mother married Floyd Langley Kissinger; they became a new family and moved to Chicago. After several subsequent moves, they landed in Charlotte, North Carolina. Many years later, in 1948, they moved to St. Petersburg, Florida. Gary was in the 9th grade by then. While in high school he was homeroom president, Senior Class Night committee chairman, part of A Capella Choir, the P&P Sports' editor, in the National Honor Society and also the Junior Red Cross. He lettered in basketball and played fast pitch softball on the championship team! He received the Most Talented award for his senior class and, after graduating from St. Pete high School in 1951, progressed to St. Pete Junior College before enlisting in the Army. Gary served his country as a stenographer in the United States Army during the Korean Conflict, 1953-1955. His assignment was in the Panama Canal. After returning from Panama, Gary met a cute carhop named Esther Morrison; they were smitten with each other. They made plans to get married and move to Tallahassee so that he could finish his degree at FSU. Gary graduated from Florida State University in 1958. He earned his degree in public administration. He used that degree to obtain a position with the Department of Transportation working as a Right of Way Executive. He was awarded many achievement honors during his employment and retired in 2003 after 43 years of loyal service. Gary and Esther were married for 21 years and had 4 Children: Gregory Joseph, Mary Langley (LEE LEE ), Christopher Michael (Chris), and Katherine Anne (Kitten). They bought a Volkswagen Bus for all of their family needs! Football, cub scouts, girl scouts, tumbling and gymnastics, ballet, piano lessons, band practice, and the list goes on. They were always coming or going, making memories as a family. Gary was very involved in his community. Some, but not all, of his achievements included: National Director of the Jaycees, Kiwanis Club, Chamber of Commerce, Boy Scouts, Soap Box Derby, Lemoyne Art Gallery, The Capital Chordsmen, March of Dimes, United Way, PTA and boosters of numerous schools that his children attended. Gary’s love of singing was evident all of his life. It started with high school chorus and musicals. In 1958, he was in the St. Petersburg Barbershop Chorus and went to Minneapolis to compete in Nationals. In 1966, he was the first President and co-founder of the Tallahassee chapter of The Capital Chordsmen. He LOVED Barbershop!!!! He was also in the choir at many churches, the latest being St. Peters Anglican Cathedral. A fun fact about Gary: he was the only male to become a Tupperware Sales person in the mid 70’s. He was called "The Bearded Tupperware Lady.“ He loved people and being a little different. He was definitely a leader, not a follower. His love of technology and anything Apple led him to help start the Tallahassee Apple Users group, in which he served many roles from President to whatever was needed. In 1982 Gary married Millie Neil at St Clements Chapel, adding 2 more girls, Maleha and Malinda, to the bunch and creating a blended family of 6 children. Gary and Millie loved to travel and began to explore the world together. They bought an RV and took turns taking trips with the grandchildren, making wonderful memories along the way. Gary was the ultimate Florida State fan. He would purchase vehicles in a garnet color and have gold accents and spears added. When the grandchildren would have their photos taken every year, they would have some sort of FSU item incorporated into the photo. Pictures of Osceola and Renegade on the field, Bobby Bowden with the football team, and various head coaches with the basketball team would line his office walls. Gary was also a season football ticket holder. Gary left behind a wonderful amount of family and friends that will miss him dearly, but he is now in heaven with his wife, Millie, and will be cheering on the Noles from above. Gary was preceded in death by his parents, wives, and step-daughter: Crystal Joseph (mother), Fred Vaughn (birth father), and Floyd Kissinger (adoptive father), Esther Morrison (first wife), Mildred “Millie” Kissinger (second wife), and Melinda Mason (step-daughter). He is survived by his children and their spouses: Greg and Ginger Kissinger (Fishers, IN), Christopher “Chris” Kissinger (Santa Clarita, CA), Mary “Leelee” Davidson (Tallahassee, FL), Katherine “Kitten” and Clint Grimes (Tallahassee, FL), Maleha and Raymond Cochran (Tallahassee, FL), his brother and his brother's spouse: Dennis and Peggy Kissinger (Birmingham, AL), his grandchildren: Duncan Kissinger, Macy Kissinger, Josh Tomlinson, Brittany Davidson, Kaitlyn Grimes, Neil Cochran, and Christian Grimes. He also leaves behind many nieces and nephews as well. There will be a memorial service held at St. Peter’s Anglican Cathedral on Thomasville Road at 1:00 p.m. on Tuesday, December 15th. For those who wish to safely watch from home, the service will be livestreamed at the following: https://youtu.be/jcA1WV51ONs In lieu of flowers, the family requests that you make a donation to Big Bend Hospice in Gary’s honor.

On December 1, 2020 Gary had a peaceful transition from his home, where he shared his life with his daughter and her family, to his heavenly home with Our Heavenly Father and the many loved ones who had gone before. Gary was born to Crystal... View Obituary & Service Information

The family of Gary Joseph Kissinger created this Life Tributes page to make it easy to share your memories.