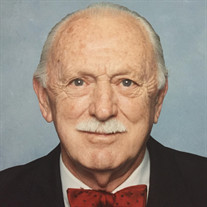 Dr. Frederick Earl Becker, Jr., 87, of Tallahassee Florida, beloved husband, father, and grandfather, passed away on July 19th, 2017. He was born on April 10, 1930, in Vicksburg MS, to the late Frederick Earl Becker and Willie Ruth Carwile. He is survived by his loving wife of 52 years, Barbara Bain Becker, three children and one grandchild: Thomas Hilary, Alyson, and Andrew (Josey). He grew up on a farm in Ashland, Alabama and attended Auburn University, and earned a degree in Veterinary Medicine in 1952. He subsequently served as a Captain in the U.S. Air Force Veterinary Corps with a tour of duty in Korea. After his tour he moved to Miami, FL and shortly thereafter he established Bird Road Animal Hospital. Along with being a veterinarian, getting married and starting a family in Coral Gables, FL, he was also part owner of the Playhouse & Biltmore School, the Blue Grotto Italian Restaurant, GEM-B Electric Supply, all in Miami, and a Burger King franchise owner in Maine, Texas and Canada. In 1978 he started the Becker Real Estate Company in Coral Gables, and after the destruction of Hurricane Andrew, he started BEC Custom Builders, LLC. He was a longtime member of the Rod & Reel Club, the University Club, and the Riviera Country Club. He was a lifelong football fan, a Miami Dolphin season ticket holder and Auburn University Fighting Tigers fan, WAR EAGLE FOREVER!! He also enjoyed hunting, fishing and travelling with family and friends. He and Barbara fell in love with the Florida Keys and had several vacation homes in what he called PARADISE, his love of the Florida Keys was instilled into his family and many friends. He was known for his humor and redneck ways, always having a joke or story to tell. He was a great husband and father and provided us with many special family trips and experiences. He will be very missed by all who knew him over his long and eventful life. As per his wishes, he will be cremated and his ashes scattered in his beloved Florida Keys. A Celebration of his life will be held at a later date. In lieu of flowers, please make contributions to Canine Companions and the American Cancer Society. On-line condolences may be made at [email protected]

The family of Dr. Frederick Earl Becker Jr. created this Life Tributes page to make it easy to share your memories.