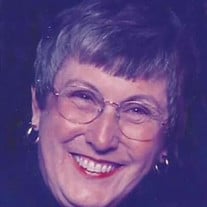 Elma Marie Pandak Smith went home to the Lord on January 21, 2022, at the age of 84 in Tallahassee, Florida. A loving wife, mother, daughter, and friend, Elma’s quick mind and kind heart touched people’s lives wherever she went. Born at St. Margaret’s Hospital in Hammond, Indiana on July 26, 1937, she was the oldest child of Elmer Balint Pandak and Anne Marie Remesnik Pandak. Elma was a graduate of Morton High School in Hammond, Indiana and a dedicated member of the Girl Scouts of America. She briefly attended the University of Chicago and was on the women’s basketball team there before heading to Indiana University at the age of 16. At IU Elma was a member of Zeta Tau Alpha sorority and made lifetime friendships. She double majored in Business and Education and received her Bachelor of Science degree from Indiana University in 1958. While at IU Elma met the love of her life, Donald Howard Smith, in a summer economics class. They were married on November 14, 1958, and settled in Valparaiso, IN where Elma took a teaching position in Jackson Township, IN. Don and Elma welcomed their son, Robert Howard, in 1963 and their daughter, Suzanne Marie, in 1971. A talented baker and gardener, Elma was a natural mother and was loved deeply by her children. She stayed at home while Robert and Suzanne were young, but once Suzanne was in school, Elma headed back to the classroom as well. Elma taught business classes at Lafayette High School near St. Louis, Missouri. She loved teaching high school students and taught some of the first computer classes there in the 1980s. Elma and Don loved to travel and had lived in a variety of places over the years (Valparaiso, IN; Munster, IN; Austin, TX; Houston, TX; Macon, MO; and Chesterfield, MO). After Elma’s retirement from teaching in 1992, they moved to the beach in Destin, FL, which was one of their favorite vacation spots. Several years later they sold that house, upgraded their travel trailer to a Motor Coach, and traveled around the country for more than two years straight. All their adventures were planned meticulously by Elma and included a several-month road trip all the way up to Alaska where, among other things, they walked on a glacier. While they still traveled often, Elma and Don eventually settled in Tallahassee, FL where their daughter, Suzanne, lived. In 2014, Elma had two strokes and brain surgery. While she couldn’t get around as easily after the strokes, Elma never complained. She loved to spend time with her family and would regularly beat them in card and board games, especially Monopoly, Dominoes, and Uno. Elma is survived by her best friend and loving husband of 63 years, Donald, and her loving daughter, Suzanne. Elma was preceded in death by her son, Robert Howard; her brother, Robert Joseph Pandak; her mother, Anne Marie Remesnik Pandak; and her father, Elmer Balint Pandak. At her wish, Elma will be cremated and buried next to her son at Graceland Cemetery in Valparaiso, IN. Also, at her wish, a graveside service won’t be held until late spring or summer when the weather will be warmer. Instead of flowers, Elma’s family requests that donations be made in her name to the American Heart Association (www.heart.org).

The family of Elma Marie Smith created this Life Tributes page to make it easy to share your memories.