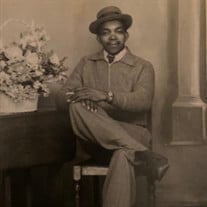 Edbert Seymore Salmon passed away on January 25th, 2022, with family by his side, he was 89. Born in the Parish of St. Elizabeth, Edbert grew up in the southwest region of the beautiful island of Jamaica. In 1959, while operating his own store, the young entrepreneur met the extremely attractive Gloria Thompson – the attraction was immediate. In 1961 he set out to Great Britain promising his sweetheart that he would send for her as soon as he was able to. They were married a year later on the 8th of December 1962 in a small but intimate ceremony, they would go on to have five children. In England, Edbert supported his family working in customer service for the local bus company. A family man at heart, Edbert relished evenings and weekends with his family interrupted only by the church activities and events. In the fall of 1973, at the urging of his sister, he decided to move to the United States, he also decided to send his children to Jamaica to experience much of what they had heard so much about. In America, Edbert supported his wife and five children while working as a machinist for Polycast technologies. A man of faith, he was very involved in the local community church and would help out by serving as a member of the choir as well as an usher and Deacon. Outside his growing circle of family and friends, his greatest interest was his garden, where he grew Oranges, Strawberries, Onions, Carrots, Tangerines, Cucumbers, Radishes, Potatoes, Lemons and much more along with a variety of herbs. He moved to Tallahassee, Florida where he would spend his retirement years adoring his grandchildren and continue to serve in the church as well as enjoy his garden. Edbert is survived by Gloria Salmon, his wife of 59 years along with their five children Courtney, Bevin, Collisa, Curtis and Glenda and his grandchildren and great-grandchildren.

Edbert Seymore Salmon passed away on January 25th, 2022, with family by his side, he was 89. Born in the Parish of St. Elizabeth, Edbert grew up in the southwest region of the beautiful island of Jamaica. In 1959, while operating his own store,... View Obituary & Service Information

The family of Edbert Seymore Salmon created this Life Tributes page to make it easy to share your memories.