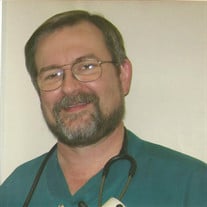 Donald (Don) Scott Chester, of Tallahassee, passed away suddenly on Wednesday, February 25, 2015. Don, a native of Whigham, GA, was born at Grady County Hospital in Cairo, GA on March 7, 1964. He graduated from Whigham High School in 1982, attended Bainbridge College and Valdosta State University. He later received his Respiratory Therapist’s Registration from Thomas Technical School in 1987. Don has worked in Pulmonary Care as a Registered Respiratory Therapist and Clinical Instructor at Tallahassee Memorial Hospital since 1987. He also worked flex-staff at Arbor Rehabilitation Center during the late 1980’s and early 1990’s. He will be missed greatly by all of his family and friends. Don is survived by long-time companion, Jon-Mark McKinley; his father, William Chester; brother, David Chester and wife; sister, Carol Chester; nephews, Dylan and Branson all of Whigham, GA. He also leaves behind aunts, uncles and cousins, as well as Imelda, Winston and Buddy, Don and Jon-Mark’s beloved cats. He was preceded in death by his mother, Mary Ann Palmer Chester. A visitation will be held on from 4-6pm, Sunday, March 1st at City Church, 1200 West Tharpe Street, Tallahassee. A memorial service will follow at 11am, Monday, March 2cd at City Church. He will be interred on Tuesday at the Woodlawn Cemetery in Whigham, GA. Tholley Taylor with AmeriCare Funeral and Cremation (www.AmeriCarefc.com or 850/627-1111) is assisting the family with arrangements. Donations can be made to the TMH Foundation at TMH.org or by mail to 1331 East Sixth Ave. Tallahassee, FL 32303.

The family of Donald (Don) Scott Chester created this Life Tributes page to make it easy to share your memories.