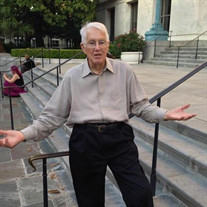 Donald Francis Cox age 90 passed away at his home in Lynn Haven, Florida on Saturday October 14, 2017 surrounded in the love of his wife Donna. He was born June 19, 1927 in Diehlstadt, Mo to Joseph Louis and Katherine Marie (Maynard) Cox. He grew up in Missouri and later moved to Michigan, Georgia, and Florida. He was preceded in death by his granddaughter Angela Nicole Chase, son Donald Francis Cox, Jr and wife Mary Ellen O’Leary. He was also preceded in death by his parents and five siblings: Joseph, Russel, Weldon, Maureen, and Alice. He is survived by his loving wife Donna Lucarene Cox, seven children: Donna (Jim) Hieftje, Kathryn (Dean) Melchi, Denis Cox, Patricia (Dennis/deceased) Mock, Joseph (Alberta) Cox, Michael (Julie) Cox, and Mary Ellen (Andrew) Tenant. Two step-children Kristianna Kilbourne, and Dawn Cogliser. He is also survived by twenty six grandchildren and eleven great grandchildren. Also surviving him are numerous O’Leary brothers and sisters in law and 60+ O’Leary nieces and nephews. He attended Diehlstadt Consolidated schools where he was named “Teachers Pet” in his high school year book. He excelled at basketball and went on the play during his service in the Navy and in college. He served on the naval ship the USS Markhab in the Pacific during WW II. After the conclusion of the war, he travelled throughout the United States as a key player on the Navy Basketball team. He had very special memories of those games and his achievements and was fond of sharing his experiences. After his discharge from the Navy, he attended Kilgore Junior College in Texas where he also played basketball. During his life, he pursued many successful businesses - he owned an appliance store, a real estate office and a successful real estate investment firm. Even up to the end of his life he was pursuing that last big deal! He took great pride in his Arabian horses: breeding many champions and showing Arabian horses to US and Canadian National Top Ten status. Special family memories include those horse shows and many family adventures on the “farm”. In most recent years we all enjoyed special times on the beach, sunsets and wine, and New Year’s celebrations. Don was known for his competitive spirit, hard work, and determination. He was much loved and admired by his family and friends and will be greatly missed.

Donald Francis Cox age 90 passed away at his home in Lynn Haven, Florida on Saturday October 14, 2017 surrounded in the love of his wife Donna. He was born June 19, 1927 in Diehlstadt, Mo to Joseph Louis and Katherine Marie (Maynard) Cox. He... View Obituary & Service Information

The family of Donald Cox created this Life Tributes page to make it easy to share your memories.

Donald Francis Cox age 90 passed away at his home in Lynn Haven,...