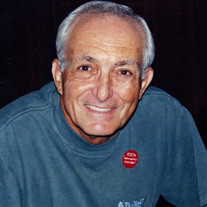 Donald Stephen Bruneman (Don) died on October 12, 2016 in Tallahassee, Florida. Don was born in Littleneck, Long Island, NY and attended Peekskill Military Academy. After graduating from Michigan State University, Don became a pilot in the Army. After marrying his wife of 54 years, Joyce, he and his family spent 17 years in the Caribbean, South America and Central America, where Don worked as a territory sales manager for a chemical corporation. After retiring, he and Joyce moved to Phoenix, Arizona, where they played tennis, bridge and bocce and enjoyed their dear friends at PebbleCreek. Don was a competitive tennis player and a Senior Olympics silver medalist. Not satisfied with retirement, Don worked part time at a women’s prison as a literacy coach. After Joyce became ill with Alzheimer’s Disease, Don took impeccable and loving care of her at home until her death in 2011. Later in life, he enjoyed the stellar company of his dear friend Virginia and his Chihuahua, Feliz. He had recently moved to Tallahassee to live with his daughter and son-in-law. Don was a wonderful son, brother, husband, father, uncle and grandpa. He will be greatly missed by his daughter Allison Bruneman, of Irving, TX; daughter and son-in-law Judy Alexander and Brian Corbin of Tallahassee; son and daughter-in-law Gene and Gail West of League City, TX; daughter and son-in-law Lupe Bruneman and Ono Salvador of Miami; granddaughters Whitney Alexander of The Colony, TX and Samantha Corbin of Tallahassee and grandson Max Corbin and his wife, Abbey, of Raleigh, NC; brother and sister-in-law Gil and Merle Bruneman of Addison, TX; nieces and nephews Carol and Sandy Dochen, Steve Bruneman, Bret and Pana Bruneman, Jill and Robert Fischer, and Keith and Kelly Bruneman and all of their children. A private family celebration of Don’s life will be held in Austin, TX in November. If desired, donations may be made in his honor to the Alzheimer’s Project in Tallahassee, FL, http://www.alzheimersproject.org/Give/ and Jewish Family Service of Dallas, TX http://www.jfsdallas.org/donate

The family of Donald Stephen Bruneman created this Life Tributes page to make it easy to share your memories.