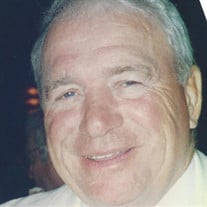 Forrest “Dewayne” Freeland, 82, of Chattahoochee, died Wednesday, April 5th, 2017. He is survived by his beloved wife of 20 years, Kathy Freeland. A native of Fairmont, West Virginia, Dewayne served his country as a Korean War Veteran in the U.S. Marine Corps. He was an officer with the Fairmont Police Department but his most notable achievement was the lives he touched through youth sports. He was instrumental, along with Nick Saban, Sr., in starting the local Pop Warner Football League and the building of Mary Lou Retton Park in his home town of Fairmont. He and Nick Saban, Sr. were close friends yet bitter rivals as coaches on the field. His son, Steve mentioned his Dad as one of the only teams that could beat Nick’s team. He also coached Little League and American Legion baseball. Dewayne would later serve as a Police Officer in Lakeland and Broward County, where he retired. He moved to Chattahoochee from Lakeland in 2004 and had worked at the Golf Club of Quincy since then. He enjoyed taking care of his 80 acre ranch and his 25 black Angus cows. Other survivors include two sons, Stephen Wayne Freeland of Lakeland; and Bradley Chris Freeland (Amy) of Tallahassee; two brothers, Charles Freeland (Brenda) of Quincy; and Barry Freeland (Vickie) of Fairmont, WV; one sister, Barbara Lee Jackson of Fairmont, WV; two sisters-in-law, Lynn Ellen Woods and Susan Jane Phillips; one brother-in-law, Joseph Arthur Phillips (Diane); three grandchildren, Forrest Freeland; Aly Freeland; and Stephen Freeland; his mother-in-law, Nancy Ellen Phillips of Lakeland; and several nieces and nephews. A visitation will be held from 10:30am-12:00pm on Monday, April 10th at Lifesong Funeral Home, 20 South Duval St., Quincy, FL (850.627.1111). A graveside will follow at 1:00pm at the Tallahassee National Cemetery.

The family of Dewayne Freeland created this Life Tributes page to make it easy to share your memories.