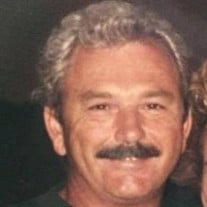 Dan Farrar, 72, a long-time resident of Tallahassee, FL died December 24, 2019, after a lengthy illness. He is survived by his wife of 41 years, Ginny Farrar. Dan was born September 22, 1947 in Freeport, Texas to DJ and Luciana Farrar. He graduated from Brazoport High School and later served in the U.S. Army where he obtained the rank of Sergeant. He moved to Tallahassee in 1974 and graduated from Florida A&M University with a degree in Horticulture/Agriculture. He worked for Tallahassee Nurseries and owned Garden Care. He later worked for the City of Tallahassee and retired as the Superintendent of Parks and Recreation in 2011. Dan was an avid hunter and fisherman. He looked forward to spending time at his beach house in Alligator Point and fishing with his son, Josh and wife, Ginny. He also enjoyed his annual fishing trips with his buddies to South Florida. While living in Tallahassee his Texas roots took hold on many Friday or Saturday nights as he spent the nights singing, dancing or simply enjoying his family and friends. Dan was preceded in death by his parents, DJ and Luciana Farrar; father-in-law, Joe Collins; and brother-in-law, Art Heitz. Other survivors include his son, Josh Farrar of Tallahassee; sister, Theresa Farrar Maier of League City, Texas; two brothers, Steve Farrar and Mark Farrar (Suzanne) of Lake Jackson, TX; two sisters-in-law, Allen Collins Heitz (Don) and Cathy Collins Galavis (Carlos) of Tallahassee; brother-in-law, Phelps Collins of Quincy; and his mother-in-law, Shirley Collins of Tallahassee. A celebration of Dan’s life will be in the Spring of 2020, Dan’s favorite time of the year. Our family would like to thank Big Bend Hospice and Dr. Roy Forman for their kindness and compassion during Dan’s illness. Memorial donations may be made to Big Bend Hospice, 1723 Mahan Center Blvd., Tallahassee, FL 32308.

Dan Farrar, 72, a long-time resident of Tallahassee, FL died December 24, 2019, after a lengthy illness. He is survived by his wife of 41 years, Ginny Farrar. Dan was born September 22, 1947 in Freeport, Texas to DJ and Luciana Farrar. He graduated... View Obituary & Service Information

The family of Dan Farrar created this Life Tributes page to make it easy to share your memories.