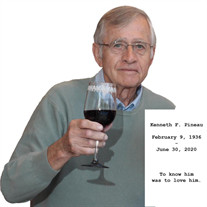 Chief Master Sergeant Kenneth F. Pineau, USAF (Ret.), 84, of Tallahassee, passed away on June 30, 2020. Mr. Pineau’s 50 years of honorable and decorated public service began the day after his high school graduation in 1954 with his enlistment in the United States Air Force and ended in 2003 after a 20-year span with Collier County (FL) Government. Born in Jamaica Plain (Boston, MA) on February 9, 1936, Kenneth Francis Pineau was the first-born to Agatha May Pineau (née Gallant) and Ignatious Angus Pineau - French-Canadians from North Rustico, P.E.I. who had become naturalized U.S. Citizens. North Rustico was the magical retreat where Kenny, his brother John and his sister Elaine, would spend entire childhood summers by the sea. Because of the preponderance of Pineaus and Gallants from that area, he was known locally as “Kenny Getty Jack Douse” (following the generational naming customs of the area). His father’s untimely electrocution as a repair lineman in the aftermath of the unnamed hurricane of September 1944 while working on Martha’s Vineyard was a defining moment for eight-year-old Kenneth, who from that day forward checked his childhood and began working from fourth-grade (Blessed Sacrament Parochial School, Jamaica Plain) onward in order to help his widowed mother support the family. After graduating from Christopher Columbus High School (North End, Boston) in 1954, he began his first of thirty years in the Air Weather Service of the USAF. Before his retirement as Chief Master Sergeant K. Pineau in 1984, he served in many overseas assignments including France, the Congo, Vietnam, Spain and Germany. Less than one-third of his 30 years were served stateside (DC, MA, NJ). While he was stationed outside of Paris in the early 1960’s, Marie-Françoise Duval (1938-2012) caught his attention and the two married in August 1964 - in advance of the October 1965 arrival of their first and only child (Daniel). The following year, he embarked on his one-year Vietnam tour in Phu Cat (RVN) and returned in late ‘67.The remaining years of the decade were based in Massachusetts - close to his mother. From 1970 onward, he continued to provide a great life for his family while stationed in Spain (Madrid) and Germany (Ramstein) before returning stateside and eventually retiring from the USAF in 1984. The new retiree enjoyed the easy-life for a few months before starting his 20-year career in Naples, FL - ultimately retiring as Collier County’s Emergency Management Director. His second retirement compelled him and Marie-Françoise to move out to Las Cruces, New Mexico where they would begin yet another chapter of their adventure. Lured by the idyllic year-round climate and fascinating geography - they planted roots again and enjoyed what the region offered. After cancer swiftly took Marie-Françoise away in 2012, he moved to Tallahassee, FL where he could be close to his son and family. Again, he planted roots and became involved with the Tallahassee Parkinson’s Awareness Choir as well as with Good Shepherd Catholic Church. He is survived by his son Daniel, his daughter-in-law Meredith, his grand-children David Pineau, Sophie Pineau, Mirabella Trammell,, Ava-Kay Trammell and Jack-Douglas Trammell, his brother John and sister-in-law Mary, his sister Elaine and brother-in-law Buddy. He enjoyed enduring friendships spanning decades and was truly loved and respected by those who knew him. A Memorial Mass will be held at noon, Saturday, July 4, 2020 at Good Shepherd Catholic Church in Tallahassee. The committal service with full military honors will be held at 11:00 AM on Monday, July 6th at the Tallahassee National Cemetery. In lieu of flowers, please send contributions to The Michael J. Fox Parkinson's Foundation, www.michaeljfox.org. Lifesong (lifesongfunerals.com or 850/627-1111) is assisting the Pineau family with arrangements.

The family of CMSgt Kenneth F. Pineau, USAF (Ret.) created this Life Tributes page to make it easy to share your memories.