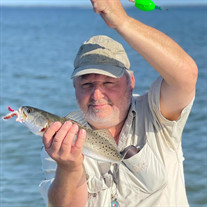 Charles Victor Edwards, 59, passed away peacefully, surrounded by loved ones, on Wednesday, Aug. 25, 2021. Born Sept. 8, 1961, to Charles and Yvonne (Whittle) Edwards, Victor grew up in Greensboro with his sister Pamela and brother Doug. Known far and wide for their antics, the brothers grew up thick as thieves and marveled their entire lives about how they somehow survived their teenage dirt bike shenanigans. Victor married Stephanie (Marlow), and together they welcomed Derringer, who was the absolute pride of Victor’s life. From the day he was born, Derringer and his dad were inseparable and shared many of the same loves, from fishing to football to farming. They spent the last several years growing vegetables on the land Derringer shared with his wife, Whitney (Anders), who Victor loved fiercely and like his own daughter. But, Victor knew a love no greater than the love for his two grandchildren, Kaybrie and Dax. He spoiled them both endlessly with his attention and adventures. Known for his empathy and care for others, especially his parents, Victor was like a second dad to many of his nieces, nephews and his beloved ‘adopted’ son Alex, who he helped raise since childhood. When he wasn’t farming with Derringer or his own father, he was enjoying his mama’s cooking and fishing at St. George Island. Victor is survived by his parents, Charles and Yvonne; his son, Derringer, and daughter in law, Whitney; ‘adopted’ son Alex; grandchildren Kaybrie and Dax; sister Pamela Gay; brother Doug (Flor); half-brother Rick (Mary Katherine); six nieces and nephews; many cousins who were more like siblings; and countless friends and co-workers, all of whom will miss his biting sense of humor and infectious laugh. A service will be held at 11:00 AM on Saturday, August 28th at Fellowship Assembly of God Church on the Bristol Hwy in Quincy. The viewing will be one hour prior to the service. The interment will held at the Church Cemetery immediately following the service. Livestreaming of the service is available by using this link, https://outcast.zoom.us/j/94161178455?pwd=bVRLNnMxWDFiZVBxRzB3SlNzYi9mZz09. In lieu of flowers, please consider a donation to the Apalachicola Artificial Reef Association (www.apalachicolareef.org), noting that the donation is in memory of Victor Edwards. The family will deploy an artificial reef in his memory to contribute to conservation, recreation and research.

The family of Charles "Victor" Edwards created this Life Tributes page to make it easy to share your memories.